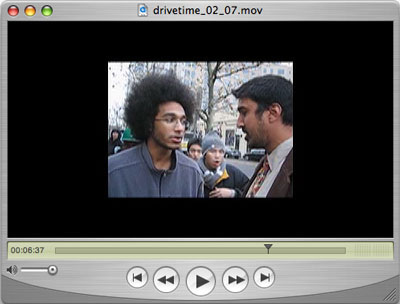 Share
Steve Garfield and Ravi Jain, speakers at the Making Mini-Movies seminar sponsored by the Filmmakers Workshop, talk about how video weblogs are changing the way people see film.

Making it the film industry used to be all about who you know. Not anymore. Video weblogs, or vlogs, are changing the way media are promoted and distributed. Video blogging allows filmmakers to engage with viewers directly via web, iTunes and even cell phones.

On November 15, the Filmmakers Workshop held a free seminar Making Mini-Movies at the Bernard Toale Gallery. Vlog experts, Steve Garfield and Ravi Jain, led the discussion, lending their expertise to up-and-coming filmmakers. A crowd of about 50 people attended the seminar to learn how to promote, produce and distribute films on the internet.

"Vlogs are showing big media that viewers want to do more than sit back and watch. Vlogging makes it easier for us to share videos," Garfield says. "The exciting thing is that this video can come from an expensive video camera, point-and-shoot digital cameras, or cell phones. Now that a lot of people are walking around with video production devices, you are going to see a lot more video being shared."

Garfield began vlogging as a personal challenge to see if he could incorporate video into his weblogs. Things took off from there. He covers a wide variety of topics, from pop culture to politics and he is now the Boston correspondent for Rocketboom.com, one of the most popular vlogs on the Internet. Garfield even had a hand in the 2006 Massachusetts gubernatorial campaign, through his vlog coverage of Deval Patrick.

"The advantage of vlogs is that in addition to putting video up on a web page you get all of the benefits of blogging," Garfield says. "Blogging allows you to have a conversation with your site visitors through comments."

This makes vlogging good for film promotion because it allows the filmmakers to keep their audience updated on production in the best way they know how, through film. "For filmmakers, there’s a long time between projects," Ravi Jain says. "With vlogs you can engage and maintain an audience. If you generate a good buzz with a video blog, people can tune in and keep abreast for your next project so you don’t have to start from scratch next time around."

As an undergraduate at Oberlin College, Jain customized his own degree combining computer science, photography and film theory into a unified discipline. His now is the vlogger behind DriveTime (drivetime.ravijain.org), a weekly talk show that he produces out of his car. He began his vlog in October 2005, after coming up with the idea sitting at a stoplight on his way to work.

Jain, who has dabbled in filmmaking himself with his web-based sitcom Three Abreast, says that many filmmakers have begun to make their films specifically for the web.

Vlogs are also an alternative to finding a distributor. This way, filmmakers can have full control over their work. Once uploaded on to a vlog by the filmmaker, viewers can download the films to their cell phones or iPods. "Vlogs are getting more coverage in the media. They are also becoming easier to find. More hardware devices are coming out that allow viewing of vlogs, both on TV and on portable devices," Garfield says.

Once filmmakers post their films on their blog, they can use it to make money in a number of ways. If it is a heavy traffic site, filmmakers can get high advertising rates for inserting post-roll video ads, says Garfield. Sites such as Blip.tv are starting to experiment with allowing video producers to insert ads with their films.

Although Garfield experiments with these methods, he makes most of his money though consulting jobs. "I’ve consulted with companies who are interested in getting my perspective on their plans to enter the video blogging space," Garfield says. "I also work with companies to advice them on user interface issues to make sure their video sites have all the features that both producers and consumers like to have. I’ve also set up video blogs such as It’s Jerry Time and Boston City Councilor John Tobin’s video blog."

Jain admits that vlogging may be complicated for beginners. "There are a lot of steps," he says. "It can seem overwhelming, but my message is to just try it out." Recent technology tailored for vloggers can take away some of the frustrations for those just starting.

"It’s going to be easier to share video from the street with cell phones like the Nokia N93 that I’ve been evaluating," says Garfield. "It’s got built in WiFi along with email and an application called Lifeblog which allows you to shoot video and post it to your vlog with just a few keystrokes. And it’s high quality 640 x 480 30 fps video too. That is a future that I couldn’t even see a few months ago but it’s here now."

Even Hollywood has had some interest in vlogs. For instance, television shows such as Battlestar Gallactica uses vlogs to enhance the story and use podcasts to give commentary on episodes. "The thing we need to be careful of is that we don’t let Hollywood turn vlogs into TV shows," Garfield says. "Although some vlogs are just TV shows on the web, there is so much more that TV can learn from what we’ve been doing over the past few years. Connecting to an audience, collaborating with viewers, having a conversation about episodes."

And, there are the very things that make vlogs so conducive to filmmaking. "There’s a whole video blogging community," Garfield says. "Once you watch a few blogs and leave a few comments you’ll see what I mean."

Learn more about Steve Garfield and watch his vlogs at http://stevegarfield.com

The next Filmmakers Workshop takes place on January 17, 2007 with a Rough Cut Work-in-Progress screening of ‘For the Love of Movies: The Story of American Film Criticism’ – more information at http://www.motionmedia.org/calendar/.

Learn more about Steve Garfield and watch his vlogs at http://stevegarfield.com The next Filmmakers Workshop takes place on January 17, 2007 with a Rough Cut Work-in-Progress screening of 'For the Love of Movies: The Story of American Film Criticism' - more information at http://www.motionmedia.org/calendar/.