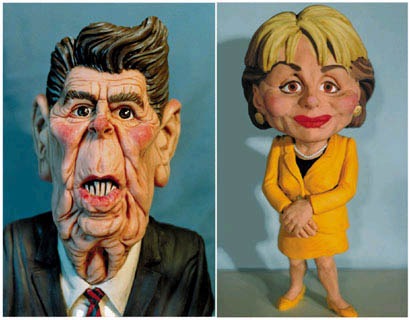 Share
Animator and illustrator Gabriel Polonsky has turned a love of drawing and art into a one-person font of creativity at his animation studio, and clients have noticed.

Anyone might envy Gabriel Polonsky for the life he has created for himself: he is doing what he loves, he loves what he is doing and he is earning a living doing it. For more than 20 years this native of Boston has worked as an illustrator and animator, freelance for the most part, but since 1992 he has headed his own firm, the Gabriel Polonsky Studio.

The creative life comes naturally to Polonsky, who grew up in a household where both of his parents were artists. When Polonsky was five years old, his father introduced him to the wonders and possibilities of film.

"My father taught Fine Arts at Boston University and one day he brought home a Regular 8 camera and taught my brother and me how to do claymation," says Polonsky. "That was the start of 15 years of filmmaking for us." The brothers made animated and live action shorts, entered festivals and had screenings in various venues around Boston. "That was our little league," he jokes.

When he was a senior in high school, Polonsky began an internship at Century III Teleproductions in Boston, which later became the DI Group. The internship led to a full time job there and the beginning of his professional career. Polonsky kept drawing, working and gaining experience and never looked back or stopped to go back to school. For five years, he was a freelance illustrator, developing a strong client list including the Boston Globe and Prentice Hall publishers. He would do (and still does) political caricatures for the former and textbook illustrations for the latter.

Polonsky began a five-year relationship as a steady freelancer at Olive Jar Animation, a leading firm in Boston, in 1987. He did many jobs at Olive Jar including character design and clay animator. He also designed and built the mechanical structures, or "armatures" that support the clay figures. "I used to be a bike mechanic when I was a kid, so I’m good at mechanical things," he explains.

In a statement that might surprise animators and filmmakers new to the field, Polonsky says he didn’t even own a computer until 1998. "I was shooting film until then," he says. His studio still includes a 16mm camera as well as a pencil test system and a full workshop for building all structures. "The workshop tools also come in handy for repairs around the house," he laughs.

Polonsky believes he has weathered the ups and downs of the industry by keeping overhead low and by drawing on his experience to determine what the clients need. In his decades of work in the field he has "held every position on an animation job." This knowledge has helped him assemble a regular team of freelancers he can call upon depending on what the job requires.

The Polonsky Studio has a working relationship with a company in New York that does the digital ink processes for its projects. For a typical commercial Polonsky will do 750 drawings (cels). He designs the color palette and determines the exposure sheet, then ships all of it to New York where a technician will organize and color the cels and transfer it to the final medium and in 3-4 days the product can be shipped to the client. In addition to the on-air promotions for networks, Polonsky has completed commercials for McDonald’s, Marshall’s Stores, Bubblicious gum, and Polar Beverages.

In 1998 Polonsky was nominated for an Emmy in the category of "Outstanding Achievement for Main Title Design in Daytime Programming" for work on a PBS show called "Woof! It’s a Dog’s Life with Uncle Matty." Although he did not win the award that year, the nomination was personally fulfilling since he created the entire sequence from a brief premise provided by WGBH, the station in Boston that produced the series.

Just this past year Polonsky was hired by Noodlesoup Productions to design the characters for the opening animated sequence of the feature film, "Duplex" starring Ben Stiller and Drew Barrymore. Although Polonsky has made his own films and has worked on other independent films, this was his first feature film work for a major studio (Miramax). Dave Lipson, the Executive Producer of Noodlesoup is a friend of Polonsky’s and knows that one of his strengths is caricature. "They (Lipson and Noodlesoup Director Jeff Noodleman) wanted the old UPA style, like animated TV commercials from the 50’s," Polonsky says.

He drew numerous versions of Stiller and Barrymore, finding challenges unique to each of the subjects. Stiller’s prominent forehead and deep brow can easily make him look sinister, says Polonsky, and a young attractive woman like Barrymore is difficult to draw in caricature because of her smooth face and symmetrical features. Polonsky drew several versions of both actors, making adjustments in hairstyles, facial features and clothing until everyone, including Stiller and Barrymore, was happy with their caricatures. He also drew a series of main action poses, known as the "key poses" for the characters which the animators used for their work. "It was a great project," he says, "and I was honored to be included."

The creative spark that comes from collaboration is a great motivator for Polonsky, "I love to work with talented people — to learn from each other," he says. He also enjoys sharing his knowledge with students. He has taught classical cel animation and character illustration at the Art Institute of Boston at Lesley College since 1993. "It’s a nice break from commercial work," he says, "and I’ve hired some students for projects."

Polonsky says that while he likes being the teacher he does not regret the fact that he was never an art student himself. "I feel that I’ve had the equivalent of life experience," he says. Polonsky does admit that he’s questioned his decision a few times. "At times when my career’s not going well I think that I should’ve gone to school for something." However, Polonsky has observed his own students lose confidence in their abilities when they look at the work of their peers. He believes he avoided that early self doubt simply because he was not in a classroom of other art students. "I had more confidence in my work," he says "I always went for the top clients."

For Gabriel Polonsky, life and art and career are intertwined. From his earliest memories of learning to draw to his introduction to film to his initial career steps he has always stayed close to his artistic roots. Luckily for him, his experience and talent have provided him with personal and professional satisfaction. "Deep down all I really like to do is draw pictures," he says.