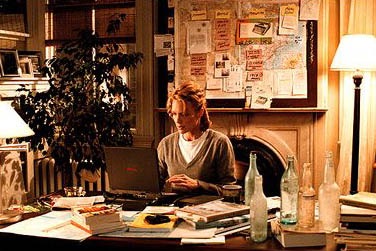 How to Be a… Set Dresser

Share
For this segment of NewEnglandFilm.com’s 'How to Be a...' series, veteran set dresser Helen Rasmussen from Portland, Maine offers advice for those starting out in the trade.

On March 8th it was, once again, snowing in Massachusetts. But did that stop the Farrelly Brothers and the cast and crew of their upcoming movie "Stuck On You" from filming their remaining autumn "Vineyard" scenes in Rockport? I think not! In fact, the next day, Matt Damon and Greg Kinnear (who are co-starring in the film together) stood on the sidelines ready for action, while the crew melted inches of snow, so everyone could wrap up and head south to Miami where they are now completing the movie. Ah –the magic of film.

So, how can filmmakers turn Rockport into Martha’s Vineyard, winter into fall, or an empty studio into — well? Answer: they hire a creative art department with talented set dressers.

Set dressers take on a most important role, not only in film and television, but in theatre as well. The set dresser is in charge of making a set look as realistic as possible through decoration. The dresser works in accordance with the style of the script and the instructions of the production designer, set decorator, and the art director. A dresser’s job requires multitasking, organization, and the preparedness to make changes at a moment’s notice. According to Helen Rasmussen from Portland, Maine, what makes a good set dresser stand out is his or her attention to detail, creative problem solving skills, and the ability to remain attentive and flexible in the most stressful of situations.

Rasmussen has been working as a set dresser in television and film for over seven years, with feature credits including "Message in a Bottle," "Drink Me," and "Far Side of the World." She has also done a variety of commercial work with companies such as McDonalds, Citizen’s Bank, and the Honda Motor Corporation. Currently, she is in New Zealand working as the drapery foreperson on the Warner Bros. film, "The Last Samurai."

Rasmussen began her career after graduating from the Maine College of Art where she concentrated in graphic design.

"I can’t say [that I had] an immediate inspiration to dress sets. There was a progression from work in theatre and in commercial photography. Finding the perfect rug, lamp, or making a flower arrangement for a shot, my expansion of practical and creative skills, and [the knowledge] of the tools needed to make something look a certain way for the camera: all of this got me more interested in how that happens in film," Rasmussen said.

Rasmussen got her first television gig working on commercials as an assistant in wardrobe and set decorating. As an assistant, she was responsible for finding a particular prop for the scene, cleaning the set for filming, and taking pictures between takes for the continuity of the background. She got the job through people she had worked with on other projects.

"You must work to get yourself hired for each project. My first job was a ‘word of mouth’ recommendation. In my experience, the film business progresses in this way: you begin as an assistant in any department, hopefully one that interests you, and see how the process works. Then, you work hard and are reliable, and people remember. They remember even more if you are not reliable," Rasmussen said.

Naturally, experience in or related to the art of set dressing is crucial when applying for a dresser position. Working on as many projects as possible, no matter how large or small, will help in establishing contacts and therefore, resulting in future opportunities and promotions to higher paid positions in the art department. Aspiring set dressers can find crew calls on a number of sites, including NewEnglandFilm.com.

"Every time you assist on a project, and people know they can trust you, that you follow instructions, and that you are helpful, you are that much more likely to get called in again," Rasmussen said.

The art of networking to get hired for future films is essential in this field, as most set dressers work freelance or as independent contractors. The exception to this may be working on a regular television series, or with a large production company whose sound stages are used often.

"Once you have been involved in a production, even as an assistant, stay in touch with the people you directly worked with. Find out if they know of upcoming projects and let them know you are interested in more work. Also, ask what else you can do to improve your knowledge," Rasmussen said.

Rasmussen feels that the best way to prepare for an interview in this field is by having a resume with good solid references, even if they are from other departments of production. She suggests creating a video or CD of any projects that the applicant has been involved in that will reflect the experience they’ve had.

"In my experience, there is not a heavy level of competition in this field. It is more about finding a niche for the kind of projects you are best at, and becoming part of a team. Set dressers work as a team and are more effective when they compliment each others abilities," Rasmussen said.

So, you’ve been working hard, you’ve followed all the guidelines, and you have a secure job as a set dresser. What type of lifestyle should you expect? According to Rasmussen, the hours can be very disruptive to personal time, but the reward comes from the finished product.

"What is great is that each job is a little different and has its own challenges, you will absolutely learn something new every time, and you will absolutely use what you learned the next time. The hours are long and hard, as they are with many positions in film and television, and there is a lot of pressure on set. Time is always a factor, you need to work quickly and neatly, and remain calm."