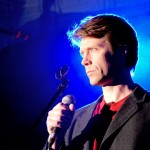 A seasoned stand-up comic loses his edge, forcing him to choose between his two passions.

New England Connection: Made in Vermont

Director(s) Bio:: Michael Fisher graduated from New York University's Tisch School of the Arts. He is a native of Vermont. In addition to his own filmmaking, he teaches film courses at Champlain College. 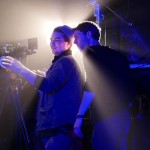 Cal Hopwood, DP, and Michael Fisher, director, on the set of HEADLINER