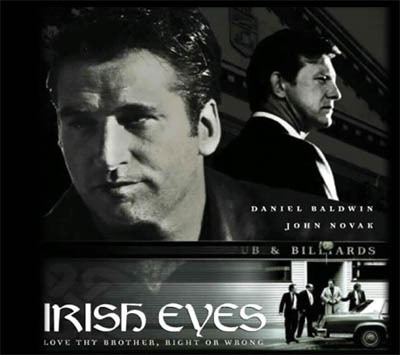 Milton, Massachusetts native Daniel McCarthy paid his dues in Hollywood, working various production jobs on low budget independent films, before directing his short film "Selling In." Now, with "Irish Eyes," a labor of love that began in 1995, McCarthy debuts as a director of feature films.

His Boston roots are evident in this tale of two brothers from a tough South Boston background who follow divergent paths in life: one becomes the Massachusetts state attorney, the other the head of the South Boston Irish mob. Though the real-life media story of Whitey and William Bulger is the inspiration for the story, the film is much more than the usual rehashing of the brother versus brother, good son/black sheep fable. It is about the difficulty of hanging onto your roots, your family and the old neighborhood, when the community you grew up in is steeped in corruption and violence.

McCarthy talks about the film "Irish Eyes" — how he worked through numerous problems along the way, and what getting behind the camera meant to him.

SR: What was it like to finally direct a feature film?

McCarthy: It was the best of times; it was the worst of times. After years of film school suffering through endless, torturous classes on theory, I got out into the real world and began working as a PA [and worked] through the ranks [until] finally working as an assistant director on low budget independent films. But directing was always my eventual goal. And by 29, I was doing it. Living the dream. But it is hard as first timer. I encountered many problems that I would approach differently the next time around. The film was completed so I guess "all’s well that ends well."

SR: What was your approach to directing the film?

McCarthy: I have read that Alfred Hitchcock considered the actual filming to be the most boring part of the g entire filmmaking process. Evidently he was so meticulous in the pre-production process of planning camera shots and actors blocking that the actual mechanics of implementing what he envisioned was like a precise instrument. A way of working that allowed for no margin of error and I can only surmise little room for improvisation and those serendipitous moments on celluloid that are a by product of the organic nature of film and not planned for.

John Ford, on the other hand, was said to work with no preconceived game plan and rather just created on instinct, covering the scenes from how he envisioned it right there in the moment. Two totally opposite approaches to filmmaking and both men geniuses in cinema. My approach fell somewhere in between.

SR: What was a typical day on the set like?

McCarthy: Every morning I would show up to set with the shot list, a blueprint for how I wanted to cover the day’s scenes. No matter who you are, there are some standard Cinema 101 guidelines that cannot be ignored… the master shot or wide shot that establishes a sense of place for a scene; the medium shot; the over-the-shoulder shot; and the close up, which for obvious reasons is the most effective camera position for conveying the depth of a characters emotion. The close up does not lie. All shots whether static or moving or low angle or high are a derivative of these four basic shots.

But due to the evolutionary and compromising nature of lower budget filmmaking, I was often faced with situations beyond my control that would effect the outcome of how much coverage on a scene I was able to get. A script page heavy day, multiple location moves, weather, unprepared actors, indecision on my part, and a slow cameraman could all contribute to whether a scene received the attention it deserved or whether we got a master shot off and moved on. It is the nature of the beast. I look forward to the day I can spend all day or even days on one scene. But I’m sure that luxury comes with a whole new set of problems and challenges. In the end that’s all filmmaking is: problem solving.

SR: What do you see as the role of the director in a film?

McCarthy: Filmmaking is indeed a collaborative effort with each individual a necessary spoke in the wheel. But if each aspect of a film is a spoke than the director truly is the rim holding everything in place and ensuring that the whole revolves cohesively. The entire responsibility, the success or the failure of a picture falls on the shoulders of the director. One of the biggest tasks is to be able to have an answer for the thousands of questions you receive on a daily basis. Also a director must have the ability to be able to discern the difference between knowing what situations you have to provide a definitive, confident answer for even if you are not sure yourself and those situations where you can the humility to answer "I don’t know. What do you think?"

SR: What advice do you have for aspiring directors?

McCarthy: There are only two pieces of advice that I can give aspiring directors: the first one is to work on film sets. Get as much experience that you can in as many positions on the crew that you are able. Learn what every crewmember does. You don’t have to master every position. But you have to know what each one does. The crew definitely has more respect for a director that has learned by working his or her way up through the ranks than one that just walks on a set and doesn’t know his c-stand from his stand in. And the second piece of advice is: just direct. Whether you have to write the script yourself, raise the financing through returning cans for the five cent deposit and lug your families old, suitcase sized VHS camcorder on your shoulder… just go out and do it. I don’t know where it will lead, I can’t make any promises about success or failure, but I know that it beats sitting on the couch dreaming.

SR: What brought you to make "Irish Eyes"?

The original idea for the script was something that had been swimming around my head for sometime. I’d like to claim divine inspiration, but the fact of the matter is that the theme of one good brother and one bad brother is as old as the bible and as new as the Bulger brothers of Boston. Billy Bulger and his older brother James "Whitey" Bulger are Boston legends. Born and raised in a white housing project in South Boston, each was destined for large things and honed their individual skills that would lead them to success, relentlessly — Billy by perfecting the use of his brain; Whitey with the use of his fists… The theme of conflict between one good brother and one bad brother was the only through line that remained from the original draft to the one that was finally produced five years later, and I feel that the theme was one that kept my interest in the project.

SR: How did you get financing for the film, and then get actors like Daniel Baldwin on board?

McCarthy: The financing was raised through private equity. We were able to secure such a great cast because unlike most independent films, we actually had some money to do this project. The actors also really responded to the script. The leading role was originally going to be played by another well-known actor, however due to contract disputes he dropped out. Daniel was originally hired to play a four-day role as the father, so when our original lead dropped out we offered the role to Daniel.

SR: What are the distribution prospects for "Irish Eyes"?

McCarthy: Right now we are actively looking to secure distribution. We have had offers for video and cable but I am set on getting a theatrical distribution first. That is looking good at least on a limited basis in New York, Boston and San Francisco.

SR: What projects are you currently working on?

McCarthy: As an independent producer I always have to have projects in various stages of development. Unfortunately, nothing in the immediate future.