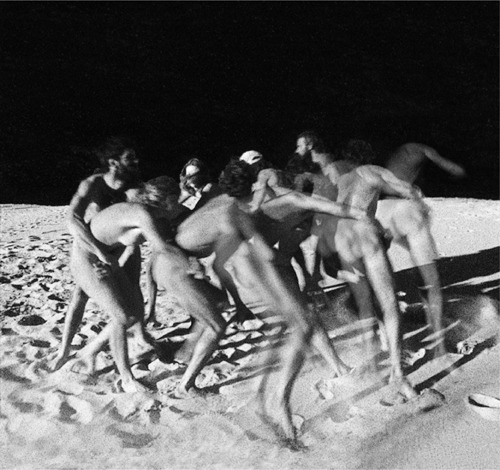 "The Same River Twice," winner of the festival’s Best Independent Documentary award, juxtaposes Robb Moss’s footage of 1978 river trip through the Grand Canyon with present-day interviews and scenes of the rafters in their grown-up lives. Moss and his friends were all river guides, and when they could they took trips together, spending their time in an "unscheduled, communal outdoor life." This is the 1970s, mind you, when the young people of the nation were still coasting on the vibes of the flower power generation that preceded them. There are plenty of fit, young, naked bodies to admire — believe me, it’s a strange sight to see a bunch of young adults riding boats and rafts down a raging rapid wearing nothing save their life vests.

As you might expect, some of them might never want to abandon such a life. Jim, whom they once revered as a near-river-deity, now lives a reclusive life in Coloma, California, where he is slowly building his own house, its proportions defined by numbers in the Fibonacci sequence. He stills works as a river guide — indeed, he’s been one since 1973, except for one 6-month stint as a dentist.

Nowadays, though, most of Moss’s partners in peaceful rebellion are fully engaged in the world. As the film begins, Barry finds himself fighting for re-election as he nears the end of his fourth term as Mayor of Placeville, CA. He also works full time as an administrator of a psychiatric care facility and struggles to squeeze a little time with his family into his busy schedule. Danny, once Jim’s summer girlfriend, now lives with her husband Peter in Santa Fe, New Mexico, where she has recently taken a job as an aerobics instructor after suffering through a career as a genetics counselor. Jeff, after an intense period of political activity, now spends his time as a writer, organizational consultant, and radio talk show host. Cathy is serving her ninth year as Mayor of Ashland, Oregon after struggling for years as a development director of Planned Parenthood.

It’s always compelling to see how people change and stay the same through the years, to find out how the promise of youth blooms or withers on the stem — or more often just grows in tangled, unexpected directions. Jeff and Cathy, for example, were married before they went on the 1978 river trip, and they have found their relationship more difficult to maintain through the hardships of life than on an extended vacation. Moss follows his subjects for a year, as they deal with the issues that most concern them: political activism, engagement with the world, man’s relationship with nature, the precarious balance between career and personal satisfaction, the issue of drugs and their own children (having partaken liberally themselves), elderly parents, and their own mortality. It’s no surprise that members of this generation would lead restless, wandering careers, either run to or away from politics, and fret about self-fulfillment. Moss’s longstanding intimacy with his subjects allows them to open up to him and relax in front of the camera as they ponder their youth and where they have ended up. The cast of characters Moss has assembled are often nutty and sometimes even a touch grating, but they succeed in winning you over. "The Same River Twice" is a rich, rewarding film, never failing to keep your interest. Worth a good look.

Director Lisa Seidenberg offers another take on nudity in her short documentary "Being Human," which chronicles activists Vincent Bethell and Russell Shaw Higgs as they parade naked — okay, sometimes they wear backpacks — through London in an act of political defiance. The theory goes something like this: Modern day society’s insistence on wearing clothing regardless of their necessity has created a false sense of self revolving around fashion and appearance. The need to cover our bodies has implanted in us an unnatural sense of shame that heightens body-image anxieties. So Vincent and Russell take to the streets, rallying supporters and providing chuckles of surprise from Brits and tourists alike. Seidenberg provides a curious, informative peek into the lives and minds of a couple of guys exercising their right to civil disobedience. The film was even used as evidence in our heroes’ obscenity trial and helped lead to the dismissal of charges against them. Inspiring!

Winner of the festival’s Best Independent Narrative award, Bettina Broglia’s compelling short "Black Flowers," filmed on location in Argentina, tells a dark, brooding tale of a man coming to grips with demons from his childhood. Through a chance occurrence in a shabby market, he discovers the whereabouts of the old tango dancer responsible for his mother’s murder. After tense moments and much tango, the inevitable confrontations occur, with thought-provoking results.