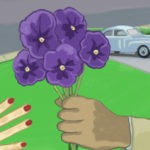 Larry, a 93 year-old widower confined to a nursing home, remembers a time when he had more spring in his step. Based on real audio recordings from 2002, animator Kristen Palana uses individually painted digital images to imagine and recreate her grandfather’s first attempts to woo his beloved Roz. Set in both 1943 and 2007, Larry and Roz is a three and a half minute glimpse into one couple’s six decade relationship.

New England Connection: She was born in Fall River, MA. in 1976 and grew up in Swansea, MA where she lived for 18 years. She went to The Massachusetts College of Art and Design in Boston from 1994-1998. She now lives in Rome, Italy where she teaches Digital Media at The American University of Rome. The film Larry and Roz takes place in Somerset, MA; Newport, RI; and Providence, RI. The main characters were born and raised in Southeastern New England and have the strong accents to prove it.

Director(s) Bio:: Kristen Palana is a multimedia artist based in Rome, Italy and a dual citizen of Portugal and The United States. She is a tenured Associate Professor in the Communication Department at The American University of Rome. Kristen also has taught in the Art Department at William Paterson University in Wayne, NJ. as well as in the DDA Department at Pratt Institute in Brooklyn, NY.
Kristen received her MFA (with Distinction) from Pratt Institute in Computer Graphics and Interactive Media and also holds a BFA (with Distinction) in Painting from Massachusetts College of Art and Design in Boston, MA.
Traveling and volunteering in developing countries rank among her biggest interests 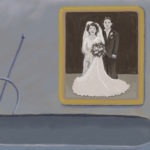