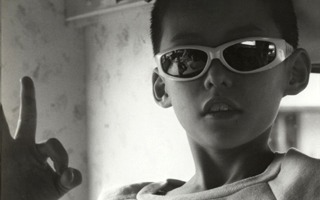 Share
Steve Maing discusses his short film, 'Little Hearts,' an honest and thoughtful look at the complexities of childhood friendships, screening at the New England Film and Video Festival this month.

We can learn a lot from kids. Just ask Jamaica Plain filmmaker, Steve Maing. His short film, "Little Hearts," came about as a result of what he learned from his students in an after-school program. Maing went into the course thinking he would be teaching the children something about video production. They wound up teaching him about the power of honesty in storytelling.

"Little Hearts" is Maing’s first film, and he describes the experience as "the best time of my life." Winner of both the Slamdance Audience Award for best short and the Best of Festival in the New England Film and Video Festival, it screens as part of the latter at the MFA on March 28. The idea for the film came from his own experiences growing up in New Jersey with two friends, but the motivation arose out of his work in those afterschool programs.

"Seeing the videos that the kids made was really inspiring," says Maing, who taught through the Boston Film and Video Foundation and other institutions. "It was completely not about the craft at all, but about telling a story instinctively. I wanted to try to do something as honest as that."

After hearing Maing tell a story about an incident in his childhood, a friend suggested it would make a great film. The timing of the suggestion seemed to align perfectly with the discoveries Maing had made during his teaching experiences. So, inspired by his video students and encouraged by family and friends, he decided to write and direct his first film.

Maing joined forces with friends, Heather Meninucci and Josh Litwhiler, and the trio began production in August of 2000. The film follows the story of Dong, a Korean boy living with his grandmother while his parents are fighting back at home. While exploring the complex where his grandmother lives, Dong encounters a twin brother and sister and in the course of playing and hanging out together, they become friends.

The film underlines the notion that when adults are not around, the genuine moments of childhood shine through. That is the time when kids feel truly free to be themselves and explore their identities, relationships, and their place in the world. Out of this exploration, friendships are born and tested, and patterns of social behavior evolve.

"I wanted it to be a realistic portrayal of the problems that kids go through, of what they truly experience," says Maing. In order to capture the "raw and honest" look he saw in his students’ videos, Maing decided to shoot on video and to use Allie Humanek, a cameraperson trained in documentary filmmaking. He also insisted on a non-professional crew and called upon friends and family to help out, including his aunt, who often brought food to the set. Together, they all pitched in to build the set at an abandoned motel in southern New Jersey, completely refurbishing the exterior. It turned out to be a great bonding and learning experience, "the most fun part" of the whole process, according to Maing.

The key ingredient to making the film work, however, was finding the right children to portray the lead characters. Maing, Meninucci, and Litwhiler put out a casting call in Asbury Park, NJ and were shocked when over 150 kids showed up. They eventually cast Henry Choi as the young boy, and Jenna Lettera and Ryan Johanennsen as the twins. Of the three, only Ryan had had a little acting experience, which was an important consideration for Maing.

To successfully depict the reality of childhood that he was seeking, Maing let the kids be themselves, encouraging them to improvise and give their own input. "Their best stuff happened when they just took over and we got out of their way and let them run with it," says Maing. At first, as a director, he felt he ought to employ acting games in order to obtain the desired performances, but he soon realized that all this did was create a certain level of insincerity. So he gave up on the pretensions and decided simply to connect with the kids, by joining in their play and hanging around with them on the set. By doing this, he created an atmosphere that allowed their authentic experiences of childhood to infuse their characters.

"The kids were amazing," says Maing, "they would horse around, like kids do, but as long as they understood and cared about the story, when it really mattered, they were there." He is still awed by the children’s genuine performances, and can’t sing their praises loud or often enough. "Don’t even mention me in the article," he says, "Just talk about the kids."

Maing spent two years in the editing process, mostly due to constraints of time, space, and money. But with an LEF Foundation grant, he finished post-production just in time for the film to debut at the Slamdance Festival in January of 2003. The whole experience was chaotic and unreal, according to Maing, and after spending all day handing out fliers, only 30 people showed up for the first screening. But the second screening was full, and the audience responded enthusiastically, selecting the film for its audience award. As part of that award, the film received screenings in both L.A. and New York.

Maing enjoyed the entire experience of producing his first film, and is pleased with his success in capturing the spirit of childhood, its lows and highs, its joys, and its confusion. In fact, that spirit has inhabited the film from its very beginnings two and a half years ago in the video classes Maing taught. Those original kids were the true inspiration for "Little Hearts," and their spirit imbues each frame just as much as the actual children in the film. As is usually the case, the teacher became the student, and the film shows us that, just like Maing, we all can still learn a thing or two from children.