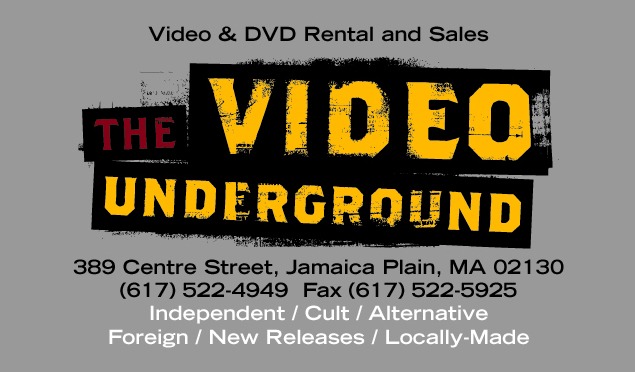 When she got a tip that someone in Vermont might have what she needed, Evonne jumped in the car. By the time she arrived, the line was out the door. Too frazzled to deal with Evonne, the guy in charge told her to go for broke. They’d worry about money later. Evonne started gathering, slowly at first, then more quickly. Soon she had piles in the aisles growing higher by the minute. Other grabbers started stealing from her stash, so she marked each pile with her name. By the end of the afternoon, she had 1,700 videos. There was no turning back.

The story above, wherein our heroine dashes north to Vermont and buys nearly 2,000 videos, is representative of her maiden voyage onto the often stormy seas of small business ownership. Evonne is Jamaica Plain’s Evonne Hyla Wetzner, founder of the underground film revolution ("ufr") and a vital part of Boston’s independent film scene. This October, she marks not only the one-year anniversary of the ufr’s association with the Milky Way Lounge & Lanes, host of the ufr’s monthly film/video events, but the realization of a long-time dream. Her video store, The Video Underground, opens its doors mid-month, just a block from the Milky Way.

Like many entrepreneurs, Wetzner first thought about starting a business when she noticed a need. As her fellow residents of Jamaica Plain well know, the funky Boston neighborhood has been without a real video presence since Videosmith was bought by the more mainstream West Coast Video. The store is still there, but now that it’s part of a bigger chain, Wetzner says, the independent spirit has diminished. She half-toyed with the idea of reviving that spirit with her own store for some months. When her employer folded this winter, she began to plan in earnest.

At first, Wetzner wanted her stock to be just like the ufr’s films: fiercely independent. Once she started networking, however, she was advised to rethink this strategy. "When I was first learning about the business," she says, "I attended a conference of video storeowners. They all told me that it was the mainstream films that ultimately make the money." Accordingly, Wetzner broadened her vision to include the moneymakers, but vowed pay more attention to the indies when it came to actually promoting rentals. "I decided to include the mainstreams, but at the same time create my own market niche," she explains.

The storeowners who advised her on her video selection turned out to be a great resource overall. Wetzner met many of them through VSDA, the Video Software Dealers Association. "Everybody was so supportive," she says. This support was crucial, providing Wetzner with invaluable insight from real-world experts and putting her in touch with resources like the woman in Vermont whose own video demise meant the birth of Wetzner’s rental collection.

Once in possession of product, Wetzner honed in on a space, a search she had already begun when she got the fateful call from Vermont. Just as her network of video storeowners steered her towards her merchandise, her network of Jamaica Plainers ultimately led her to a location. She had perused several places. One was subterranean, underneath another retail space, an option that would have made the store quite literally The Video Underground. The other space was huge and beautiful, as well as extremely and ultimately prohibitively expensive. She decided to go with the basement, a choice that eventually fell through, causing Wetzner to sink into an entrepreneurial funk.

Fortunately, Wetzner is friendly with many of the staffers and owners of local JP businesses, including the bartenders at Brendan Behan’s, where she counts herself a regular. "Everyone knew I was looking for a space," she says. "One day, one of the bartenders said, ‘Hey, I think Gerry [the owner of Brendan Behan’s] might be looking to rent the place across the street." Indeed Gerry was looking to rent. Though the space was a bit tight, the timing and the location were right so Wetzner decided to make it work. She contacted her third network: friends.

From painting the walls (gold and maroon) to hanging video racks and unpacking tapes and DVDs, Wetzner’s friends have proved as invaluable as her other networks. Perhaps more important than their physical exertions has been their help with honing in on her core group of independent films. In a sense, they’ve been her first customers and, as Wetzner states, one of her top priorities is being "really open to customer suggestions."

This consumer-orientation melds nicely with Wetzner’s well-established devotion to getting the works of unknown filmmakers into the public eye. Boston audiences want more independent films of the type she’s worked so hard to promote. The number of film festivals hosted around the city and Wetzner’s own frequently sold-out series at the Milky Way attest to this fact. But, as she points out, interested filmgoers who can’t make it to the one-time-only festival screening of an interesting film don’t often get another chance to catch the movie. She hopes to change that by offering the option to rent.

Ultimately Wetzner will use the store to cross-promote with other indie-minded organizations such as the Boston Underground Film Festival and BuyIndies.com. For example, she explains, she could devote one shelf to BuyIndies’ top sellers and another to the films recently screened at a local festival. The festivals and Web sites will reach new audiences, fledgling filmmakers will reach new audiences, and new audiences will experience cutting edge film from the comfort of their own living rooms.

Perhaps this all sounds too pat for the real world, but the very fact of The Video Underground’s existence is testament to Wetzner’s far-flung, well-established network of supporters, a network that has the reach to ensure that the Underground starts strong and builds momentum from there. Wetzner did it with her film series, and she’s well poised to do it again.