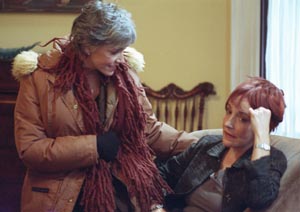 ‘Made Up’ Makes it Big

Share
Lynne Adams dishes about her new movie 'Made Up' -- a cosmetic comedy with heart -- screening at this year's Woods Hole Film Festival.

Lynne Adams is a cheerleader for creativity. She talks animatedly about "creative passion" and how women need to support each other in the arts. And while at first blush her new movie, "Made Up," appears to be a girly comedy about beauty and aging, when you wipe away the lipstick, its core message trumpets the value of imagination.

Here’s the scenario: Elizabeth James Tivey, a retired Hollywood actress, has let her looks fade like the Tinsletown spotlight. She is graying, doesn’t watch what she eats and feels positively liberated. But in a jarring reality slap, her husband leaves her for a gorgeous younger dish, and at the same time, her daughter Sara becomes obsessed with appearance, wants to drop out of school, and longs to become a beautician.

And that’s not all. Kate James, an aspiring filmmaker who is Elizabeth’s older sister, persuades Elizabeth to let her daughter Sara give her a makeover. Enter the ingenious/hilarious "Tivey Facelift" involving band-aids, rubber bands, a wig and a leap of faith.

After the transformation, Kate documents the results on tape, including an arranged meeting at a restaurant between Elizabeth and her straying spouse.

Of course a heartwarming comedy ensues when Elizabeth unexpectedly falls for the restaurant’s owner, Max, and a production company considers developing Kate’s "video project" into a romantic comedy.

Elizabeth is played by Brooke Adams, a screen siren with 35 films under her belt, who also happens to be Lynne’s younger sister and the film’s producer. Lynne, who starred on the soap "The Guiding Light" for 10 years and wrote the one-woman play "Two-Faced" on which "Made Up" is loosely based, plays older sister Kate and co-produces the flick.

And Tony Shalhoub, who has enjoyed a career on both the big and small screens, and is married to Brooke in real life, is the movie’s director.

Got that straight? It’s a family affair both on screen and off. Even Eva Amurri, who plays daughter Sara, physically resembles both Lynne and Brooke, although she’s not actually related.

But back to the creativity factor. "In the movie, my character is making a movie, and that’s really what it’s about," Lynne reveals. "It’s about women being artists and finding some kind of worth in that. It’s creating beauty as opposed to being beautiful."

For both Lynne and Brooke, creative passion blossomed while doing summer stock at their father’s theaters. "I started acting in his plays when I was seven and I just loved it," says Lynne. "Our favorite thing to do would be to just go and sit and watch rehearsals, even when we weren’t in the play."

Their father produced children’s shows in New York, ran theaters all over the country and trusted his daughters with plumb roles. Eventually Lynne landed the soap opera gig, and Brooke made her way to Hollywood. When Lynne’s stint on "The Guiding Light" ended, she moved to Los Angeles to take a stab at cinema, where Brooke had already fashioned a successful career.

"I hated it out there," Lynne recalls. "Mostly because people felt sorry for me because my sister was so successful. When I look back on it, I was doing pretty well, but I didn’t feel like that at the time. So then I started writing seriously."

While Brooke’s star rocketed, Lynne retreated from LA, moved to a small town and wrote continuously. In fact, her inspiration for "Made Up" sprung from the gray hair she let surface while living in the country.

"My hair went white when I was 16," Lynne confesses. "By 22 I basically had white hair. Of course I dyed it. But when I moved to the country I stopped. The difference in the way people treated me was shocking."

Lynne remembers being ignored because she looked older, even though she was only 35. When she got a wig, which she would don sporadically for auditions, the reactions to her "younger" appearance were equally outrageous.

And so the concept for "Two-Faced" was born. Once completed, it ran in Los Angeles for five years under Brooke’s direction. The script was optioned, but the movie deal fell apart for various reasons, none of which had to do with the actual plot.

Frustrated with Hollywood, Lynn married and moved to Boston, where she decided to make the film on her own. "At first I thought I’d make a little, tiny video," she says. "But it got bigger and bigger until I had quite a substantial cast and a real crew. We shot it in three weeks, in my house [in Jamaica Plain] and we made it in a much more grand style than I originally envisioned."

And just as with any creative collaboration, there was at least one major snag. Lynne, Brooke and Tony didn’t cast their Sara until two days before shooting started — they couldn’t mutually agree on an ingénue for the role.

Brooke, who has known Eva Amurri since she was born, bumped into her one day in Manhattan, and instantly knew she would be perfect for the part. "We didn’t know if she could act, but she’s so beautiful and probably had talent inherited," Lynne says, referencing the talent of Eva’s mother, Susan Sarandon.

After initial misgivings about Eva’s age, (she was only 15), a mix-up when someone incorrectly told Lynne that Eva’s parents didn’t want her to act, and a Fed Ex debacle when Eva’s performance tape was lost, the stars finally aligned and the trio had their Sara.

"Brook, Tony and I just looked at each other and went, ‘Oh my God. She’s fantastic!’" Lynne says. "She was breathtaking. She just had it. She was refreshing, she knew she was funny, and she was just brilliant."

"Made Up" was completed this past February and is now making the rounds on the festival circuit where it won the jury award at the Santa Barbara Film Festival, just screened at Nantucket and will be at Woods Hole Film Festival this summer.

Women of all ages simply adore the film, relating to the sisters’ bond, the mother-daughter relationship, and the comedic trials of attempting to grow old gracefully yet gorgeously.

"I’m very proud of it," Lynne confides. "I think everyone who has been involved in this movie is pretty proud of it. How often does that happen in life? Hardly ever."