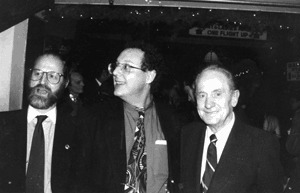 On Top of the World: The Global Entertainment and Media Summit

Independent filmmakers and musicians gather to learn how to use the Web and beat the system.

Just as major media companies feared that Napster would change the music industry, many members of the film industry feel threatened by the bountiful marketing, distribution, and exhibition options that Web sites provide. At the same time, digital video has removed the necessity of studio involvement, and drastically lowered the cost of production–putting control back in the hands of the artist.

As a means to promote and sustain this revolution, Steve Zuckerman, producer of the New York Music & Internet Expo, has founded an environment for film, music, and media producers to discuss–and perhaps revolutionize–the way film and music are produced. The Global Entertainment and Media Summit, taking place March 2 and 3 at the New Yorker Hotel in New York City, is intended to be a forum in which artists, producers, musicians, song writers, filmmakers, directors, and others can learn to break free of major studios and industry standards.

Zuckerman believes that technology has become a salvation for many independent artists.  He cites D.A. Pennebaker as an example of a filmmaker implementing digital vidoe due to funding reductions for documentaries. “However, in his case, he has tremendous vision. One needs to have great vision first, technology second,” says Zuckerman.

Keynote speakers at the Global Entertainment and Media Summit will include Graham Leader and Steve Dembitzer, producers of “In the Bedroom.” Other keynote speakers include John Waters, infamous director of “Serial Mom,” “Pink Flamingos,” and many other films, and Les Paul, inventor of the electric guitar and multi-track recording.

Panel discussions will focus on alternative ways to make and distribute films, along with how to incorporate music into films apart from the studio system. “Creative Casting: Keeping your foot in the door,” will discuss casting with Riccardo Bertoni, who has worked with popular directors including Woody Allan and Brett Ratner. “The Media Panel” will discuss the best ways to pitch your work, while “The Remix Panel” will feature mixers, remixers, and DJs discussing the best ways to get your product out to the public. “Dealmakers–the Legal Panel” spotlights legal matters, including how to work with attorneys.

Other speakers include Michele Meek of BuyIndies.com, and Peter Spellman of Berklee College of Music. More speakers and panels are scheduled; visit www.globalentertainmentnetwork.com for more information.

Other speakers include Michele Meek of BuyIndies.com, and Peter Spellman of Berklee College of Music. More speakers and panels are scheduled; visit www.globalentertainmentnetwork.com for more information.