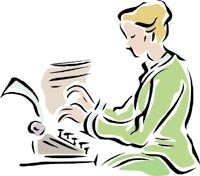 How to Be a… Screenwriter

It’s finally done–you’re sure of it. Your first screenplay.

You’ve got 110 freshly printed pages, stacked neatly on your desk and ready to go…where? To a studio? An agent? A writing competition? Being a screenwriter is only partly about finishing a screenplay. The next step is getting it read by someone who can make something of it, or who can put you in front of the people who can.

First, hone your writing skills. Then, hone your business and promotional skills.

Gary Maynard, owner and operator of the Gary-Paul Agency (www.thegarypaulagency.com), has been in the business of helping writers become screenwriters for 10 years. I spoke with him at length about how to get a screenplay noticed, and how an agent can help in the process.

First, we talked about finding an agent. Some literary agents have specific areas of expertise–for example, television or feature films. Maynard believes these agents are generally dealing with writers who have already sold their work and been in business for some time. For the newcomer, an agent would usually try to sell to as many outlets as possible, depending on the provided material.

Maynard also suggests that before sending material out for consideration, you get honest opinions from other people, even those not specifically in the entertainment industry. Of course, if you have a friend or two with industry experience or connections, that’s even better. Just be sure to send out a polished product.

Jennifer Bachman Evans has been a writer and script analyst for years, and she echoed Maynard’s suggestions. "As a writer, I feel it is important to circulate your best work," Evans explained. "Why go fishing without a hook? Some agents won’t even look at a newcomer’s work unless they receive a recommendation from someone they know. But if an agent accepts unsolicited scripts, expect that he or she is going to want to read your work… and be ready."

Maynard stresses that an agent can only do so much for a specific writer or screenplay. This is most obviously true with the screenplay itself–the writing, format, storyline, etc. Most agents have neither the time nor the inclination to critique the works they read. A professional quality screenplay is the writer’s responsibility; Maynard said 99 percent of screenplays he sees from first-time writers aren’t up to par.

"The format is usually ridiculous," he said. While a writer might argue that if the story is good, the format shouldn’t matter, Maynard believes that without the proper format a potential agent or producer isn’t even going to get to the story. "And if the writer doesn’t know the format," Maynard continued, "nine times out of ten, the story is going to fall flat. The agent looks at the format immediately."

Susan Kouguell, chairperson of Su-City Pictures East (www.su-city-pictures.com), made the same point. "Agents expect screenwriters to have that expertise. Generally, agents want to see work that is 100 percent finished and ready to sell."

The second limit to an agent’s efforts? There is only so much anyone can do to promote your work. "There are only so many hours in a day," Maynard said, "and the loudest dog gets the bone." He stressed that a writer should collaborate with an agent. "If you can find other outlets… generate attention, go ahead." He stressed that an agent must focus time on those projects that are likely to sell as quickly as possible. If your project is not quite as hot, that doesn’t mean it’s being neglected. Confer with your agent and see what you might do to help raise awareness of yourself and your writing, beyond the promotions your agent is already doing.

Competitions are one option. A writer who has had success in competitions provides ready promotional material, and this success tends to raise the writer’s profile in the industry.

Competitions can also be useful in acquiring an agent in the first place. Evans agrees that entering competitions is an excellent way to get your screenplay read. "Sometimes getting someone to read your masterpiece is the hardest part of marketing yourself," she said. "Plus, if you win or get into the final round of the prestigious contests, you won’t have to worry about soliciting agents. They will find you."

The best way to win competitions, of course, is to tell a good story in a professional manner, as Maynard advocates. "Read 100 screenplays before you write one," he said. "You really have to understand the medium."

Gary Maynard runs the Gary-Paul Agency (www.thegarypaulagency.com) production company and literary agency, teaches at Wesleyan University, Quinnipiac University, and Sacred Heart University, and is the author of ‘Confessions of a University Screenwriting Instructor.’ Susan Kouguell is the chairperson of Su-City Pictures East (www.su-city-pictures.com) and is an independent filmmaker and screenwriter. Jennifer Bachman Evans is writer and script analyst.

Gary Maynard runs the Gary-Paul Agency (www.thegarypaulagency.com) production company and literary agency, teaches at Wesleyan University, Quinnipiac University, and Sacred Heart University, and is the author of 'Confessions of a University Screenwriting Instructor.' Susan Kouguell is the chairperson of Su-City Pictures East (www.su-city-pictures.com) and is an independent filmmaker and screenwriter. Jennifer Bachman Evans is writer and script analyst. Also see 'Q&A with Script Consultant Susan Kouguell' from August 1998 and 'What I Really Want to Do is Write' from August 1999.