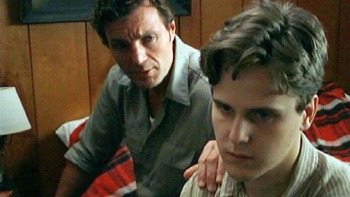 Chip Hourihan’s "Glissando" opens in a desiccated town in Arizona, where a middle-aged man (Ned Van Zandt) has come to identify the body of his father, found in a dumpster behind a motel. The young woman his father lived with gives him a shoebox full of photos and other memorabilia that evokes a colorful store of memories.

Based on a story by novelist Robert Boswell, "Glissando" tells the story of Jimmy (Chris Van Strander) and his father (Paul Frediani) as they try to make the best of their lives. Jimmy’s father has difficulty acknowledging weakness, and their life together is a hodgepodge of denial and pseudo-playful mischief. Jimmy’s mother left soon after he was born, and his father seems never to have gotten over the loss. His life is a sham, as tedious and empty as the wasteland nowhere town where he works the day shift as a motel clerk. Eventually, Jimmy’s father finds a woman to care for — Alida (Petra Wright), closer to Jimmy’s age than his own — who has unfaithfulness written all over her. She loafs around on the sofa all day, watching TV and tugging Jimmy’s heartstrings. The days go by, aimlessly.

And though "Glissando" for a time seems to proceed as purposelessly as its protagonists’ lives, the film has a direction, one that isn’t apparent until it springs upon you. "Glissando" subtly portrays a broken man, caught up in his own self-deceptions, and the son who becomes equally ensnared in his father’s pattern of self-deceit, at first begrudgingly and later of his own free, malicious will. Chip Hourihan has created a powerful, chilling work, one that will stick with you for a long time.