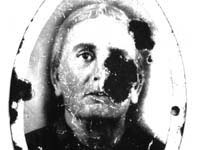 Share
A review of the film 'My Babushka: Searching Ukrainian Identities,' screening at this year’s Boston Jewish Film Festival.

When Barbara Hammer traveled to Ukraine, she went in search of living relatives of her maternal grandparents, who were born in neighboring towns near the Central Ukrainian city of Ternopil. Somehow, along the way, her interest in contemporary Ukrainian attitudes grew. The result of her travels is "My Babushka: Searching Ukrainian Identities," which documents her trip as it grows from a search for ancestry to an exploration of a changed society. Hammer cannot help but inquire into the nature of anti-Semitism and homophobia in newly capitalist Ukraine, and her unique viewpoint gives strength to this interesting look at the nation’s post Cold-War culture.

During her journey, she is inevitably led to Babi Yar, the scene of a massive Nazi slaughter of Jews during the German occupation. The history of this infamous massacre was de-emphasized (to say the least) during the Soviet era, but recent years have seen renewed awareness and a memorial at the site. Hammer’s focus is not on the Nazi atrocities but on how the Ukrainians were complicit in the events. Ukraine had pogroms long before anti-Semitism emerged on such an unheard of scale during World War II. And it seems many Ukrainians were more than willing to assist the Nazis in the mass killings. When Hammer asks passersby in modern-day Ukraine what it means to be a Ukrainian, it’s as if she expects someone to say being Ukrainian means being anti-Semitic, and she clearly has good reason to suspect as much. But capitalism has emerged as a powerful force, and the openness that can accompany it is changing attitudes, albeit slowly. Hammer finds no one who enforces her expectations but no one who will confidently dispute them.

In the arena of sexuality, Ukraine seems equally behind the times, as if the country was held in a state of suspended animation during the Soviet era, only to re-emerge with a culture similar to that of the American 1950s. Teenage girls shriek with near-hysterical rapture at a crooning singer, and Feminist author Oksanna Zabushko causes quite a stir with the publication of a study on sexual practices. If Hammer reaches any conclusion at all, it is that Ukraine is still a nation and a people in a state of flux. They have adopted many of the material aspects of Western culture but the permissiveness and open-mindedness will need a little time to sink in.