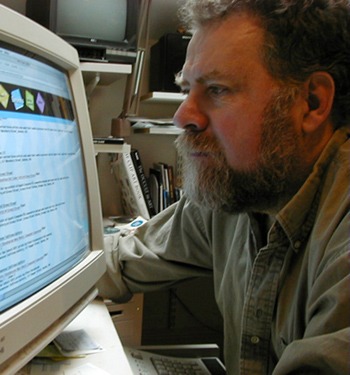 Share
Director of the Boston Cyberarts Festival and Curator of New Media at the DeCordova Museum, George Fifield sheds light on the misconceptions, the history and the meaning of 'experimental video.'
Experimental film and video, while often used in the same breath, are two very different forms of art. To help see through the labels to the art itself, NewEnglandFilm.com continues its conversation about experimental film and video in New England with George Fifield, Director of Boston CyberArts Festival and VideoSpace.

TP: What’s your involvement in experimental film and video?

Fifield: Let me start by separating experimental video from experimental film. In the best of all possible worlds it would all be called ‘experimental media’ today. But there is a strong historical difference. Experimental film has a long history that goes back to Maya Deren and Stan Brakhage and even earlier to artists like Joseph Cornell.

Experimental video or ‘video art,’ is a more recent art form that starts with Nam June Paik in the early ‘60s. From its very beginning it included single channel video, multi channel video and video installation. Its history includes artists like Peter Campus, Martha Rosler, Woody and Steina Vasulka and Bill Viola, to name but a few.

The difference resides in the fact that while both mediums can be used conservatively to tell a story in a cinematic narrative, i.e. both present moving image and sound, the nature of experimental media is to investigate the formal structure of the medium and expand and explore its edges. And film and video are very different. Film is a mechanical device with frames and sprockets meant to be projected and enjoyed in the dark. Video is an electronic device that (originally) came out of a box-like piece of furniture at home. They both have different antecedents, experimental film coming out of a motion picture past and video art being the artistic stepchild of broadcast television.

My own interest and expertise is firmly in the video art realm. My first job after college was in television production [but] I longed for the ability to make videos at home. When in the late ‘80s, I first heard of the Sony 8mm video camcorders, I read about their Flying Erase Head. This allowed the camcorder to start and stop without a horrible glitch between shots. It meant the beginning of low cost editing of video at home.

I started making videos, mostly experimental documentaries, and shortly after I started programming monthly showings of video art at The Space, an alternative art space in downtown Boston. This is the series that evolved to VideoSpace. After a number of years of programming at The Space, the DeCordova Museum asked me to curate video art exhibitions for them. Today, I am the Curator of New Media at the DeCordova. One other thing came out of my affiliation with The Space. In 1994 a friend and I curated an exhibition of computer installation, music, and literature called The Computer Is Not Sorry. This was the beginning of my interest in digital art.

TP: How would you describe "experimental media" to someone who has never been exposed to it?

Fifield: Most movies and all broadcast television are businesses whose purpose is entertainment within a commercial environment. Television has only one goal: to sell you stuff; and the shows are there to get you to stay until an ad comes on and the ad is there to sell you something. Experimental media exists outside of those commercial constraints. This is what it isn’t.

What it is, is more difficult to describe. The number of different types of creative visions that have been manifest in experimental media is incredible. There is experimental documentary, abstract video, experiments in new forms of narrative, humor, pathos, and every human emotion you can imagine. It is an art form that truly can move or disturb or excite you in all the ways that commercial media cannot.

TP: Are there misconceptions about "experimental video"?

Fifield: Perhaps the most common misconception is that it is boring. This probably came about because some of it is quite boring. More often it appears boring because we are use to broadcast ‘TV time,’ which is short bursts of choppy entertainment. When we bring that same sense of time to video art, which is sometimes paced slowly and elegantly, we become impatient. That is when we must remind ourselves that all video is not TV and need not conform to its rigid structures. ‘TV time’ has become much more frantic in the last decades and this problem has increased.

Some video art needs to be watched in an entirely different way. You cannot watch an abstract video like a narrative video. It needs to be looked at like a moving painting. We are not use to this and it causes stress.

TP: Tell me about the types of work produced by artists involved with Boston CyberArts.

Fifield: The Boston Cyberarts Festival, which I founded two years ago, has always had a strong experimental media component. This may be my influence, but others have always helped organize it. Video is a digital medium these days as is much film. The tools available to individual video artist because of the computer are so much greater than those available to the most expensive post houses just a few years ago. This year (2001) we presented the Not Still Art Festival at the Coolidge Corner Theater. This is the preeminent annual showing of abstract media in the country. The List Center for the Arts at MIT had a special exhibition of three important new media artists as well as a presentation of new media by artists of color called Race in Digital Space.

There were video and computer projected installations throughout the festival. The video/computer installation "Text Rain," by Camille Utterback and Rony Acthiviv, was the hit of the exhibition Augmented Realities at our CyberArts Festival central headquarters.  At the DeCordova, I helped organize a wonderful experimental installation by Glorianna Davenport and her research team from the Experimental Cinema Group at the Media Lab called Flights of Fantasy, which explored the future of communal story telling in digital media.

One exciting new event was The Lite Show (www.liteshow.org), which presented the finest in new experimental low bandwidth Internet media, like Flash and QuickTime. It was very well received and a great group of people had lots of fun producing it.

TP: Who are some New England experimental film and video artists we should be watching?

Fifield: I actually do not want to answer this for a couple of reasons. The first is that the answer would be too long. New England has had a population explosion of extremely talented media artists. This is because media has become a more important part of contemporary art and is no longer just made by a handful of artists in New York and the West Coast. All the art schools around have fine media departments now. Second, this area is a traditional home to artists working in new technologies (cyberartists). Artists have been coming to and through here to explore new media for fifty years and more. Institutions like the WGBH New Television Workshop, The Center for Advanced Visual Studies (CAVS) at MIT and the ICA’s CAT Fund have seen most of the greats of late twentieth century media arts come through greater Boston. Many of them have stayed.