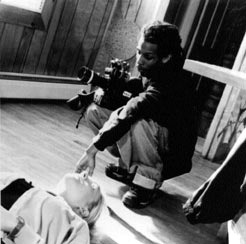 Share
Filmmaker Azeem Robinson talks about the making of 'Guilty or Not.'

Azeem Robinson is a young filmmaker committed to educating youth on important matters and dedicated to helping the film community in Boston grow. He is constantly pushing himself to become a better storyteller and to enhance his artistic skills. He isn’t afraid to tackle any aspect of the filmmaking process and that alone increases the respect his crew and actors have for him.

Robinson’s breakthrough into the film world was with his piece "Understanding Me," an insightful view of the miscommunication between young men and women. Following that was "Emulsion Side," a break from the serious issues he usually tackles. This film, a documentary, is about filmmakers sharing the trials and tribulations of their attempts at making a movie, and explores why it is they continue to pursue the difficult, yet rewarding task.

In his new short film, "Guilty or Not," Robinson plays the role of writer, director, producer and editor. "Guilty or Not" examines the death of a white women, and young black man, the suspect, who must (begrudgingly) deal with the police. Although based in Boston, the story could have happened anywhere — a black man is left as the only suspect in a white women’s murder. How is he to clear his name? Why does he feel the color of his skin will determine the outcome? Robinson’s film sends a clear message about the stereotypes that are bleeding through the minds of our society and he hopes to evoke discussion between all races.

NewEnglandFilm.com sat down with Robinson for an interview to discuss his motivation and process for making the movie.

HC: What inspired you to become a filmmaker?

Robinson: I am passionate about sharing ideas, and what better way to do that than through film? It is especially important for young people because they are less likely to read a 600-page book, so it allows me to educate the youth through a powerful medium.

HC: How did you meet the crew and actors for "Guilty or Not"?

Robinson: Both Iris Hope Dubinsky (producer) and William Narducci (producer), had worked with me in the past on "Understanding Me," "The Emulsion Side," and music videos. We have a great working relationship that is very hard to find in this industry. Both of them live in L.A., Dubinsky works for FOX and Narducci NBC. The Actors? We auditioned and ran ads with the Massachusetts Film Hotline and Boston Casting. I auditioned dozens and dozens of people to find the proper cast. Chrystee Pharris plays Mandisa in "Understanding Me" and Dina in "Guilty or Not." She is another colleague of mine who graduated from Emerson’s School of the Arts Theatre program. I love working with her. I think she can have a very long career if she continues to hone her craft. Currently she lives in L.A. Thomas Lazare, who play Marcus in "Guilty," auditioned for me and was called back in repeatedly for more auditions. He’s clever and quite imaginative and clearly carried the entire movie on his shoulders. He also lives in L.A.

HC: Tell me about the characters in "Guilty or Not."

Robinson: Marcus Brown, played by Thomas Lazare, and Dina, played by Chrystee Pharris, are the Leads in "Guilty," a story of how the media handles race relations and whether or not you are guilty is determined before you have a chance to prove yourself. The story has two main conversational scenes, one between Marcus and family friend Susan, where the theme of the story explodes, and the other between Marcus and his sister, Dina. Color is a major issue in America and the interracial relationship between married couple Dayton and Susan intensifies the story. Marcus’ role as protective friend changes at the trigger of a gun and he faces an inner battle with being responsible and truthful.

HC: What do you want your audience to walk away with?

Robinson: I want "Guilty or Not" to create discussions. I left the story open because I didn’t want to force feed my audience. It raises issues that are important to talk about and I hope my film can create important dialogue about race relations.

HC: How does music play a part in your productions?

Robinson: Music plays an important role in my pictures. In "Guilty or Not" a reoccurring theme song is used at both the start and end of the picture. Clarence Gardener composed "Guilty or Not." He’s a student/graduate now from Berkley. I met him at a screening of "Understanding Me," he liked that film so much that he expressed his interest in working with me and at the time I told him I was working on "Guilty." Coreena Brown performed the theme song "Guilty," which Clarence wrote. She’s from Berkley as well. Without Clarence Gardener’s music the film would not be viewable.

HC: What kind of support have you received from the Boston community?

Robinson: I have received major support from the Boston community. From coffee to locations, I had the opportunity to produce my film on a low budget because of the overwhelming support. Storeowners who allowed me to shoot on location didn’t even ask to see the script! The police, local businesses and the citizens showed their commitment by helping us in any way possible. Massachusetts is a film friendly environment allowing a variety of incentives to local filmmakers.

HC: Are you going to try and stay in New England to fulfill your career goals?

Robinson: I would like to stay in Boston to continue my film career, however, the money tends to be in bigger film markets such as Los Angeles and New York. So my goal is to meet the right people in those places, get the proper funding, and bring it back to Boston where I will have more creative control.

HC: Would you produce "Guilty or Not" as a feature?

Robinson: When I originally wrote the screenplay it was supposed to be a feature length film, but when I decided to produce it, I did not have the resources to follow my original idea. Ideally I would co-produce it with a studio with the original feature length script.

Robinson: Right now I have my production company, Piecemeal Films, where I am presently working on two scripts. In 10 years I would like to be directing and producing my second feature.