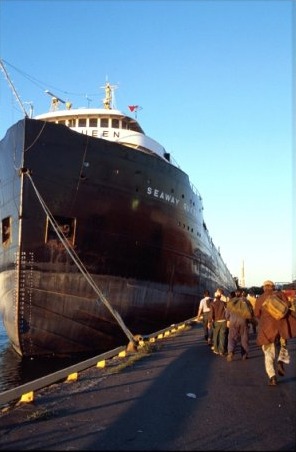 A Decade of Dedication

Share
For ten years the Woods Hole Film Festival has been celebrating the talent of New England filmmakers. Check out what the 2001 festival has to offer.
The tenth year of the Woods Hole Film Festival (July 28 – August 4, 2001) is a notable occasion on many levels. Founded by Judy Laster and Kate Davis a decade ago, this year is a celebration not only about the longevity of the festival but about the founders of the festival itself — especially since Davis’ award winning documentary, "Southern Comfort," is being screened at Woods Hole this year. It is a festival focusing not only on where New England film is today, but where it has come from.

Held the first week of August every summer, the Woods Hole Film Festival allows for the screening of films at the beautiful seaside location of the Cape. As the oldest film festival on Cape Cod, its mission statement "…to bring filmmakers to audiences and audiences to films and filmmakers" is simple yet noble. The Woods Hole Film Festival focuses heavily on regional filmmakers, with all of its feature length films having ties to the New England area this year. Founded initially as an excuse to show films that Laster and Davis had made, a decade later the festival has mushroomed to numerous screenings, screenplay competitions, staged readings, workshops, and panel discussions. It has expanded from one location to four locations: Old Woods Hole Fire Station screening room, Hoyts Nickelodeon Cinema, the Theater at Air Station Cape Cod and Redfield Auditorium at the Woods Hole Oceanographic Institution. The festival has also grown in span, from its initial three days to eight days in length.

"It has grown from a small thing to something substantial," David Kleiler, Artistic Director of the festival states. "Woods Hole is the festival that serves New England filmmakers the best." A statement that has backing, for Kleiler is also the Executive Director of the Boston Underground Film Festival along with being involved on the boards of the Nantucket Film Festival, Film Fest New Haven, and the Northampton Film Festival. "Here is this festival that started out as a thing for friends and now it is able to show the strength of New England productions."

A perfect example of this is Davis’ "Southern Comfort," which won both the Grand Jury Prize at this year’s Sundance and the Golden Spire at the San Francisco International Film Festival. Davis came upon the tale of "Southern Comfort" while researching a political piece she was doing for A & E Television Networks on the trans-gendered community. While at a convention, she met Robert Eads, the protagonist, a trans-gendered cowboy who has ovarian cancer. From this encounter, "Southern Comfort" was born. Through a carefully crafted narrative structure, Davis creates a deeply moving portrayal of love and determination in the face of prejudice. "Southern Comfort" has found distribution, airing on HBO later this year.

Along with "Southern Comfort" this year’s Woods Hole Film Festival is showcasing nine other feature length films including: "Baby Luv," "Barstow 2008," "The Blue Diner," "Lakeboat," "Orphan," and "Unfinished Symphony." As well, "Dischord," "Shadow Glories," and "Gavin’s Way," will be premiering at the festival.

In recent years the Woods Hole Film Festival has expanded into programs other than that of just standard film screenings; one of these areas is that of the staged reading. This year’s festival is showcasing two New England based screenwriters: "Elvis Heals" and "Water." Both of these readings will be directed by John Paul Oulette ("The Unnamable") and casted by Kevin Fennessey of KFC Casting. "Elvis Heals," by Marianne Leone and with star Chris Cooper ("American Beauty" and "Lonestar") and Christy Scott Cashman ("Barstow 2008"), is a black comedy/romance about a mother and her disabled child. "Water," the award-winning screenplay by Mary Feuer, is the story of the four towns that were flooded to accommodate the making of the Quabbin reservoir.