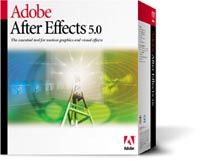 High-Five to Adobe After Effects

Share
Whether you are an old-time Adobe After Effects user or a novice, you'll find a powerful and feature-packed program in 5.0 that is surprisingly easy to navigate and understand.

If you’ve watched a day of television, or gone to the movies in the last couple of years, you have seen the effects of Adobe After Effects. Now Version 5 has been released, and it’s the perfect time to upgrade from a previous version or to try it for the first time.

It’s a monster product to be sure. It takes days to get through the introductory materials and tutorials just to learn about the product’s basic features (I highly recommend Total Training’s 24-hours of training tapes). There are dozens of add-on products from third parties that will keep you learning for months, perhaps years (see related articles on AE plug-ins in this issue).

Yet version 5 has a comforting, well-designed, user interface. It’s deep without being daunting, familiar to users of other Adobe products such as close cousins Photoshop and Illustrator, and little nephew Live Motion.

After Effects started out as a software program and along the way became an entire industry. Originally created by The Company of Science and Art (COSA) in 1992, Aldus acquired the product in 1993 and a year later Aldus was acquired by Adobe. During this time, After Effects developed legions of users who create motion graphics and visual effects for movies, television, multimedia, and the Internet.

Adobe has taken After Effects to new heights in version 5, adding z-axis support for 3D work, export to Flash format, vector graphics painting, new controls to manage effects and commands across layers and between parameters, and new 16-bit per channel color to achieve HDTV quality in projects. Sound Greek to you? Well, maybe it’s time you took some language courses. Yasou!

The first new word you might need to learn is "dongle." These are little doodads that must be plugged into a port on your computer in order for software to work. Many of the more expensive programs utilize dongles in the interest of reducing software piracy. While it’s easy to copy a CD, it’s real hard to dupe a dongle! The dongle in After Effects was used to enable the features of the more-expensive Production Bundle version. Users without a dongle would get the Standard features.

Time to jump for joy. After Effects 5 has eliminated the dongle. While dongles were probably justified in Adobe’s minds, they made life difficult for users since they could get lost or broken, or become unusable upon a computer upgrade that didn’t support the dongle interface.

After Effects is not intended as a 3D modeling or animation program. But in the world of motion graphics, you want the elements onscreen to move in depth, not just across and up and down. With the addition of 3D compositing support, After Effects users can now import 3D objects and manipulate them in three-dimensional space. AE5 can import the major 3D file formats, including SoftImage PIC, RLA, and Electric Image EI formats.

Lighting and camera effects allow for sophisticated animation that incorporates lights, shadows, and views. For example, you can create a 3D world such as an animated street, complete with cars and buildings. By changing the view to one of six included camera angles, you can instantly see your world from a new perspective, without rebuilding it. You can also add and independently control an unlimited number of lights casting their glow and shadows on any or all layers within your composition.

Any time an artist is given the opportunity to use "unlimited" anything, expect great things.

Masks and Mattes: The Shocking Truth

In addition to the particle and distortion tools used by image and motion graphics applications to generate interesting effects, they often employ the use of masks and mattes. Some people consider masks and mattes different but related, while others consider them to be the same. It’s hard to tell which is correct – even Adobe’s printed and web literature offers contradictory definitions. For the sake of explanation, let’s call them separate but equal.

An image (or layer) in a program such as After Effects could be made up of two to four channels, one of which is the alpha channel. The alpha channel is like a piece of glass over the image, letting the rest of it show through.

Mattes are similar to masks, but can be used to block off areas of another image in a layer behind the matte image. This is like placing a piece of cardboard in front of your television. You get the same effect as using a mask, but you haven’t actually affected the television by painting the screen. The cardboard would also block or show anything else between it and the television, like your VCR or the remote control you can’t find. With this cardboard matte, the opaque part of the alpha channel would be what you can’t see through (the cardboard) and the transparent part would be everything else you can see.

Whether you use a mask or a matte, remember that the alpha channel is not part of your basic cable package, and painting part of your television screen will get you in big trouble with the wife if she can’t see the answers on "Who Wants To Be A Millionaire."

Two new features are expressions and parenting, related methods of linking elements in After Effects compositions and controlling their parameters. With expressions, you can apply the properties of one behavior to another. Examples are linking the scale of one layer to the opacity of another. After linking, when the first layer’s scale decreases, the second layer’s opacity would decrease at the same rate. Expressions are created by simply dragging a "pick whip" (or line that drags out from a small icon) from one property to the one you want to link from.

Parenting provides the ability to assign multiple layers in a composition as children to one parent layer. Changes made to the parent layer will be applied to the child layers, too. Just like in the real world, all the children behave exactly as the parent does. Ha!

In addition to the many major feature additions to AE5, Adobe has made lots of subtle improvements to AE’s interface and workflow. They have reduced the number of pop-up boxes by allowing users to enter numeric values right in the timeline, or simply hold the mouse key down and "scrub" left or right with a dynamic slider control.

Single layers can be viewed quickly by hiding all others with the click of one button. They have consolidated the import process to allow users to add multiple files and file formats all at once.

Users have a set of vector paint tools to apply non-destructive effects to layers. In addition to controlling brush size, color and opacity, strokes can be recorded to a single frame, sequential frames or in real time. It’s painting your own live animation! These paint tools can also be used as masks, to cover or uncover images underneath in an animation. Imagine someone painting a live picture onto a canvas, or erasing the image and seeing it disappear before your eyes.

For users of previous versions of AE, there have been some changes to menus and commands, which may leave you wondering just where something has gone to and why its name has been changed. An example is motion tracking, which in version 4 is reached by right clicking (or option-clicking) on a file’s name in the timeline. No such contextual menu choice appears in version 5 however. Instead, look for Motion Tracker/Stabilizer under the Animation menu. When the file is opened in its footage window, there is a drop-down menu choice called simply Tracking/Stabilizer Controls.

Once in the motion tracking window, Adobe has cleaned up the interface and provided checkboxes instead of pull-down menus. A small change, but one that speeds up the process considerably – once you get used to it.

Adobe has listened to its users and provided most, if not all, the features they asked for. Take a quick glance at the many AE user group web postings and you won’t find lots of people screaming and whining at Adobe to add new features. Instead, you’ll find users helping each other learn the intricacies and techniques of the world’s most popular motion graphics application.

Adobe’s LiveMotion is an AE-lite program that works wonders for Flash creation, but comes up short as a full-fledged motion graphics app since it can’t export to QuickTime. The reverse was true of After Effects, until now. After Effects’ new ability to export projects as Flash files will please artists who work in video, film, multimedia, and the Web. The application does nearly everything a motion graphics artist could want.

My wish list of features not included in AE5 would include real-time previewing of my compositions on an external monitor – something only provided by third-party products. I’d also like to see windows that snap to each other, patterned after the layouts in Final Cut Pro. Adobe apps are famous for having gazillions of floating palettes and windows. While this allows users to arrange their workspaces to suit their tastes, I prefer an uncluttered workspace without having to continually shuffle windows.

At $1,500 for the Production Bundle, and $649 for the Standard Version, Adobe has given users more features for the same price (upgrades run $200 to $300, although there may be special offers from time to time). I imagine there won’t be a lot of hesitancy among current AE users, many of whom will likely want to upgrade given the many new features of AE5.

For novice users, there really isn’t much choice. Programs such as Premiere and Final Cut Pro can do limited compositing, and may negate the need for purchasing the Standard version of AE. Other apps such as Commotion aren’t really motion graphics programs, although they can perform some of the same functions.

If you want (or need) to do really cool motion graphics or visual effects, After Effects Production Bundle is the app to beat. And no other program comes close right now.