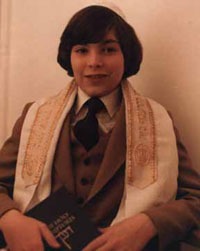 Written by Amanda Johnston of the Boston Jewish Film Festival | Posted by: Anonymous

Share
A young bisexual Jewish filmmaker reconnects with her born-again brother in 'a film without an ending.'

On Sunday, June 3rd, filmmaker Julia Pimsleur brings her intimate documentary, "Brother Born Again," to the Museum of Fine Arts, Boston. Over 10 years ago, Pimsleur’s only brother, Marc, joined a born again Christian community in a remote part of Alaska. The Pimsleurs had grown up in an intellectual, secular Jewish household in Manhattan, and Marc’s choice to join a fundamentalist Christian faith shocked both his mother and his sister. For nearly a decade, there was no communication between Marc and his family, who feared that the group he had become involved with was a cult. Julia struggled during that time to sort through her fears and emotions regarding her brother’s decision and to try to find a way to communicate with him. In 1998 she decided to make a film about her family. The result is a very poignant and personal documentary that not only begins to bridge the distance between Julia and her brother, but also provides insight and inspiration for any family that has struggled with deep personal or religious differences among its members.

"Brother Born Again" took Pimsleur and a small crew to Alaska where, after lengthy negotiations, they were permitted to film the daily lives of Marc and his fellow community members. Though she had begun communicating with Marc before the trip, and he himself makes a trip to New York later in the film, it is in Alaska that we see the most compelling moments between the two. Julia pushes her brother to explain his beliefs but also comes to realize that she and her mother have been at least as responsible as Marc for the deep divide between them. Though Julia comes to respect Marc’s choice, there are still irreconcilable differences between the siblings. She cannot accept his abandonment of intellectual inquiry, of thinking for himself as they were taught to do as children. And though Marc clearly wishes and intends to maintain this new relationship with his sister, he is not able to accept her bisexulaity.

Despite, or perhaps because of these obstacles, what we see in "Brother Born Again" is a rare example of how family members can communicate respectfully across deep differences. It is not an easy thing to do, as Pimsleur expresses in her Director’s Statement:

"It’s a film without an ending, and I actually like that because I think most personal stories don’t have real endings. In real life you rarely can wrap things up nice and neat, especially when you are talking about divisions within a family and dealing with difference. I think there are parallels in other families when a member of the family is gay or someone marries inter-racially. Families hopefully come to understand, they come to accept, but it often remains an ongoing tension, and I think that’s what it will remain in our family."

"Brother Born Again" is Julia Pimsleur’s directorial debut, though she has been involved in film and video production for more than 10 years. In 1997 she and Katy Chevigny co-founded Manhattan-based Big Mouth Productions to focus on supporting the production of social issue documentaries. Prior to making "Brother Born Again," Pimsleur served as producer on such award-winning projects as "Innocent Until Proven Guilty "(1999), which follows the work of James Forman Jr., an African-American public defender and son of a prominent civil rights leader, and "Nuyorican Dream" (2000), which chronicles the struggles and aspirations of three generations of a New York Puerto Rican family. Pimsleur is also currently involved in the production of the MediaRights.org Web site, whose mission is to make it easier for social issue media-makers and activists to find one another.