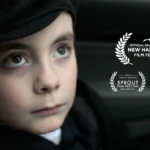 Jennifer Doll just wants her son, Jackson, to have a typical childhood, but his autism causes him to experience the world too intensely. Because of his freak outs and outbursts, he’s never been on a play-date or attended a birthday party. One day, Jennifer enrolls Jackson in an ice skating program for kids with disabilities. Even though the first weeks are rough, Jennifer sees major
improvements in Jackson’s attitude and outbursts. As the final ice skating show comes up, Jennifer hopes that Jackson will go on, believing a successful performance will be the first step toward a typical childhood.

Director(s) Bio:: A regional EMMY Award winning director/producer, Ben has executed projects in diverse and challenging locations including Bosnia, the Mexican/US border and the Ecuadorian Amazon. As the founder of T&F he has had the privilege of working with some of the organizations he admired as a kid growing up in the woods of rural New Hampshire, including the National Geographic Society, Nature Conservancy and Trust for Public Land.