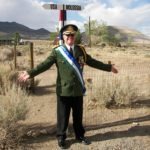 In the desert of Nevada, His Excellency Kevin Baugh has founded the independent Republic of Molossia and created a faux secession. With a population of 6 (including his 3 faithful dogs) and a complex infrastructure that ranges from a miniature railroad system to a customs booth at the front door, Molossia provokes and makes us reflect upon the meaning of sovereignty and the limits of our individual freedoms.

New England Connection: Franco Sacchi, Director/Editor has been living in new England for 18 years and went to graduate school in Boston. Meredith Blodget, Producer, was born and raised in New England.

Director(s) Bio:: Born in Zambia and raised in Italy, Franco Sacchi is a documentary filmmaker and educator based in Boston. His first feature length documentary aired on the Sundance Channel, and was an official selection in numerous film festivals including the prestigious International Documentary Film festival in Amsterdam (IDFA). In 2005 he directed This is Nollywood, a documentary about the Nigerian film industry that won Audience Award at the Abuja International Film Festival (Nigeria), and was broadcast internationally. In 2007 he was invited to speak about Nollywood at the TED Global conference. Since then he has written and lectured extensively on Nollywood. Most recently Franco co-directed and filmed Waiting for Armageddon, which received a grant from the Sundance Institute, was released theatrically in 2010 and distributed by First Run Features. Franco’s documentaries have been screened at prestigious venues such as The Museum of Fine Arts in Boston, the Lincoln Center and The Anthology Film Archives in New York.
Over the years, Franco has also developed a strong interest in economic development and the role that documentary filmmaking can play in multiplying the effectiveness of communication strategies. Since 2003 he has collaborated with the Development Communication Workshops (http://devcomworkshop.org/) directing documentary films and conducting on a regular basis a series workshops hosted by the Kennedy School of Government at Harvard University. As an educator Franco has 15 years of teaching experience with a strong background in post-production. He was a senior instructor at Avid technology from 1997 to 2002 and his clients ranged from TV Networks (ESPN, NBC news, ABC, Telemundo) to major universities and government agencies. Over the years Franco has taught hundreds of editing and filmmaking workshops in numerous schools including the Maine Media Workshops, Suffolk University, CDIA-BU, Future Media Concepts and many others.