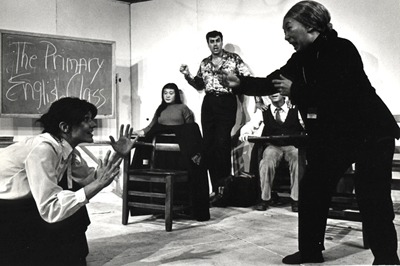 How to Be… An Actor

Share
Ouch! Youve been bitten by the acting bug. But, do you truly know if acting is the right career for you? This step-by-step guide and interview with acting coach Dossy Peabody shows you how to find out.

With hundreds of cable channels and an ever-growing number of independent films, regional and community theater productions, commercials and industrials, there are more acting opportunities today than you could snap a clapboard at. But don’t forget, acting is a tough business. It may take years of perseverance and sacrifice to become a "stah" in your own right. But if you love acting and you’re willing, you can be part of a tight-knit community, find fulfillment, and earn a living as an actor.

Test the Water before Spending the Big Bucks

Emerson College, Boston University and Brandeis University lead the field in regional performing arts programs. However, unless you’re a full-time student, your acting pickin’s are slim. Still, a quick call can’t hurt since they sometimes offer summer programs open to all.

A more surefire way to dip a toe in the acting pool is through a workshop. You’ll find lots of meaty acting courses offered by casting agencies including Collinge/Pickman Casting and Kevin Fennessy Casting. Another is Peter Bezemes Casting, which offers all levels of acting classes for motion pictures, television and stage, improvisation, voiceover workshops, and courses that demystify the business side of entertainment. On average, be prepared to pay around $300 for a 6-week program. That’s pretty reasonable when you break it down by the hour and consider that most agencies work with small groups of actors or one-on-one.

When to Call in the Coach

Let’s say you’ve taken some classes and workshops, but you want to iron out some rough spots in your technique, your frame of mind, or just want some ideas on opportunities to pursue and pitfalls to avoid. Enter the acting coach. Dossy Peabody, for example.

As you might guess, a great coach has lots of acting experience and an undying passion for acting and for teaching the craft. Dossy has acted in most every medium (including the high-profile films "In Dreams," "The Crucible," and "Mermaids") and loves coaching actors — whether they need "the works" or just a simple tune-up. Before calling in the coach however, Dossy emphasizes the importance of first acting in a group setting because, as she puts it, "Even a monologue is usually part of a dialogue."

The advantage of an acting coach is that you can work on anything your dramatic heart desires. Or, you can just show up (usually with your own scene in hand), ready to sponge up any tips the coach may offer. While there are as many rates as there are acting coaches, in some cases, individual attention won’t cost much more than a workshop.

With your acting skills in tow, you’re ready to enter the spotlight — or at least aim it toward the stage. Try community theater. You’ll find a plethora of theater companies throughout New England. You may not gallivant on stage right away, but it can be the perfect place to learn the ropes — often literally — without crushing pressure.

You may even want to go a step further and audition for post-graduate programs at the American Repertory Theater in Cambridge or Trinity Repertory Company in Providence, RI. Why not give it a shot? It could be just the boost you need.

Put Your Headshot in the Right Hands

Your confidence is building and your resume is growing. You’re ready to launch for other acting opportunities. But first, you’ll need help finding the launching pad. Often times, your instructors and fellow thespians will willingly divulge places to send your resume and 8×10 glossy (pssst… lithographs are just as acceptable as glossies and are a lot less expensive). Among the things you’ll learn is that casting agencies are perfect targets for your "press kit." Local agency names you’ll hear, aside from those mentioned earlier, will include Boston Casting and Tighe & Doyle Casting.

While you should also give producers, directors and studios the pleasure of seeing your picture, or "headshot," casting directors may be your most willing audience if you have the talent to back up your pretty face. According to Peter Bezemes, casting directors don’t even mind you calling now and then to remind them that you exist. And, you don’t need to be a Venus or an Adonis to stay in the forefront of their minds. Any look will do since any role is possible.

By the way, unlike talent agencies that keep a percentage of an actor’s earnings to pay for their services, casting agencies are paid by producers and studios. You pay nothing — a welcome relief after sending out hundreds of press kits.

This doesn’t just apply to commanding a presence on stage or in front of the camera. It also means unearthing contacts and job opportunities through diligent research. Personal referrals only scratch the surface. Okay, so some of the contacts you dig up won’t pan out and some of the jobs won’t pay. But, like everything else in life, one thing leads to another — usually in the strangest ways.

Speaking of scratching the surface, here are a few spots to look for (mainly local) industry information, jobs and memberships:

So go ahead and explore. We all have a little drama in us. It just boils down to how much you want to share it with others.