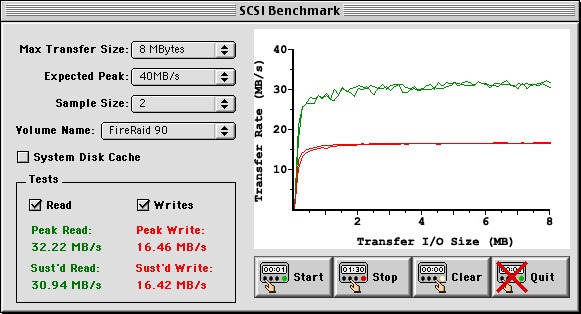 Share
RAID!! Quick, out the back door! Wait a minute now. It's not that kind of raid.

Last year I wrote about the red, wing-shaped FireWire external hard drive from VST Technologies (now SmartDisk). It offered a great way to utilize the new FireWire ports on Macs and PCs to add storage for digital video or multimedia projects. VST has continued to improve their products, and now offers a way to create a RAID array with their standard FireWire drives.

A RAID array is when you connect two or more hard drives together with some electro-conducting material like wire and circuit boards, or paper clips and duct tape, then trick your computer into thinking these multiple drives are actually one drive. Why fool your computer? Well aside from the pure joy of it, two drives spinning together churn out ones and zeros much faster than they do separately. It’s a variation on the old "two heads are better than one" thing, which holds true for hard drives and most other things — except middle managers. Because when you get two middle managers together you get a committee, whose sole purpose is to hold meetings. So try to avoid hooking middle managers together with duct tape and paper clips, because all you’ll get is a committee being very productive at doing nothing at all.

A couple of VST FireWire drives coupled with FireRAID software, however, will improve your productivity and possibly even keep you out of meetings with middle managers. Just stack a couple of their drives on top of one another, plug ’em in and install the FireRAID software. The software will show you a nice picture of each of the drives. Select two or more of them and tell the software to "stripe" them into one volume. A blinding flash of light will appear, and a whoosh of ice-cold wind will knock you out of your chair. When you regain consciousness, there may be an odor of burned eyebrows in the air, but you’ll find that your two 45 gigabyte drives now appear as one 90 gigabyte drive on your computer, and that’s all that matters.

Okay, so I made up that part about the light and wind and stuff. I actually just spilled hot coffee in my lap and screamed in a very high-pitched voice. But after I changed my pants, I did come back to find that my two drives had become one. Keep in mind here that what VST has created, no man may put asunder; which means you can’t "unstripe" the drives without erasing everything on them. But why would you ever want to?

VST drives striped with FireRAID will smoke along fast enough for digital video editing, sound recording and playback and other multimedia applications. If you don’t believe me, just look at the results from the benchmark tests I ran.

I’m no benchmark genius, but I can make a pretty graph that will impress anyone who doesn’t know what they’re looking at. What my tests show is that my FireRAID drives read data at about 31Mb per second, and wrote data at about 16.4Mb per second. Other settings revealed similar or better results (up to 18Mb/sec); while tests posted on a website I found showed even faster speeds. With digital video rolling through your computer at about 4Mb per second, these drives are fast enough to edit on and play video out to recording devices.

I tested these drives connected to VST’s 1394/USB PCI Upgrade Card. This is an add-on card that fits into a free PCI slot on a PC or newer Mac. The card has two FireWire and two USB ports, which give you more speed to and from external devices. The Apple G4s have two FireWire ports, but they run off the same chip, so multiple devices must share the throughput of this single channel. This is like you and your neighbor connecting hoses to your faucet; the water pressure to each of you will be halved if you both try to water your lawns at the same time. Adding VST’s PCI card now gives you an additional channel, and as anyone with cable TV knows, more channels are better, even when there’s nothing to watch. If you connect one FireWire drive to the PCI card, and the second to the built-in FireWire port on your computer, you should gain additional speed from the drives.

VST FireRAID drives offer excellent value for the dollar. One 45 gigabyte drive plus the PCI card and FireRAID software sells online for under $600. Add another 45 gig drive for under $500. You may find an internal 80 gig drive for less than that, but it may not be as fast and you won’t have the expandability that the external FireWire drives provide. VST also offers portable FireWire RAID setups for mobile users. For more information, go to www.vsttech.com.