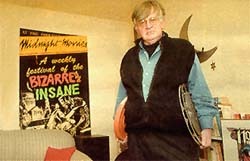 Share
Veteran of the Boston film community, David Kleiler makes it his mission to get local films 'made, sold and seen.”

A struggling filmmaker, beret askew, shoots in black and white on a deserted city street, with only one goal in mind: to capture the grit and reality of everyday life. "Finances be damned!" he thinks. "This is art."

For many, that is the image that comes to mind when the topic of independent film comes up. But filmmaking is more than art; it is also business. Just ask David Kleiler, director of Local Sightings, Inc., and a 30-year veteran of the Boston film community.

Local Sightings was launched in the early ’90s to help filmmakers get their films "made, sold and seen.” Throughout its existence, Local Sightings has been a collaborative effort, involving many different facets of the independent film community.

Kleiler says that Local Sightings was conceived after many years of wearing different hats in the Boston film community. From tenured film professor to exhibitor to artistic director of the Coolidge Corner Theatre from 1988 to 1996, he became familiar with local distributors, producers, filmmakers and the press.

During the ’80s Kleiler ran a portable underground film society called Rear Window. "That’s how I got to know a lot of the filmmakers that I work with now, or at least the trickle-down effect in terms of the new generation of filmmakers," Kleiler says. "That’s where I got to meet people like the Alloy Orchestra — people in the film community who did music for soundtracks and a lot of animation and experimental and narrative films. And so a lot of the people who are still with me, except for my interns, remember me from those Rear Window days, including the Boston press."

Local Sightings’ mission is simple: to help filmmakers get their films made, sold and seen, and to make independent films profitable. Not very romantic, but it is the reality behind film production, often overlooked when the passion of an idea hits. Kleiler’s approach is straightforward. "Especially at the student level, almost all of it is front-loaded. They think of it in terms of ‘What can we do to get the film in the can?’ They have no idea. They have no idea what the post-production costs are like. And then, the thing they never think of are the marketing costs. The big thing I emphasize in terms of making it profitable when I get a script and a proposal, [is]: ”Who’s your audience? How do you plan to reach them? And let me see your budget if you have one.’ And more often than not, they don’t."

Not surprisingly, Kleiler’s business sense, combined with an awareness of the indie scene, caught the attention of two acquaintances from his Rear Window days: Brad Anderson, director of "Next Stop Wonderland," and Lisa Faircloth Carey, former executive director of Women in Film and Video New England. They suggested Kleiler become more involved in producing. Kleiler hesitantly decided to take it on, and, Local Sightings was born.

Kleiler says he did not want to be a producer, but part of Anderson and Carey’s pitch piqued his interest. "'[T]hey said at least what I could do is do a regularized showcase for regionally produced independent films that aren’t getting picked up for major distribution," Kleiler explains. "And so that’s basically it. It’s a variation on what I did with Rear Window — not as many venues, but the whole notion is getting quality independent films to audiences that probably won’t get a chance to see them."

With what seems to be a production company boom locally, Boston may be on its way to being more than simply a local film community. Kleiler points out that Boston has recently gained momentum nationally; after all, the buzz is still audible from two Miramax faves: "Good Will Hunting" and "Next Stop Wonderland."

From Kleiler’s perspective, the film industry has come a long way. "Boston’s not there yet, but it’s a lot better off then it was five years ago. . . There are more serious producers. . . And maybe I’ll count myself among those sometimes serious. You’ve got Brighton Avenue [Laura Berneiri’s production company]; you’ve got Sarah Greene [director of  the Sundance film “Girlfight”] up in Gloucester. People that are operating here in a producer capacity are people who do have national outreach."

Local Sightings not only has a staff that has worked within the local industry, but an understanding of the various subcultures within it: students, academics, independent filmmakers. Kleiler became familiar with all of them after years of working in various capacities. Quite simply, he says, "There are [disparate] film communities, and they don’t talk to each other." Kleiler’s presence across the spectrum has made him and his projects stand out. "I know all those groups pretty well, with the exception of the people who only do advertising. I’ve gotten strong with the film critics and the academics and the BFVF kinds of independents, and the independents that have no involvement with BFVF," he says.

But, as any entity is born from something else, Kleiler sees his involvement with the Coolidge and his past incarnations as a link to Local Sightings future. "People know that when I ran the Coolidge I raised an awful lot of money, so I have access to people with money, but also because I know distributors, the people who are national in the business of specialty film," Kleiler explains. "I work with people in the development phase, and I help people once their film is made and help develop a strategy to get the film sold. And then, if all else fails, I’ll just show their film under the Local Sightings mantra."

As independent film has evolved, so have the communities that make it happen. Serving as a proactive part of the Boston film community, Local Sightings has evolved over the years, much like the director behind it, who, after decades of watching film, teaching film and showing film states, "I just want to put the emphasis on getting them made. But the common denominator has always been alternative film, not mainstream film, all the way through this. And it’s always been more of an overall sort of arts activist for those who are getting disenfranchised by the commercial system."