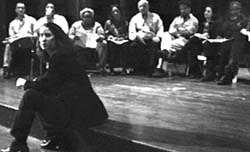 Share
Screenwriter Judi Rothberg discusses the process, the people and the payoffs of having a public script reading.

To get a better idea of what’s working and what isn’t in Judi Rothberg’s feature script, "Second To None," the author decided to produce a staged reading of her screenplay at BU’s Theater of Arts last month. A semi-finalist in the prestigious Chesterfield writing contest, "Second To None" actually marks the second script Rothberg has penned and forced herself to listen to from the audience’s perspective. Rothberg spoke with NewEnglandFilm.com about the process, the people and the payoffs of having a public screenplay reading.

LF: For our viewers at home, what’s the log line for "Second To None"?

ROTHBERG: The script is about a woman struggling to view her life as being second to none, even in the face of tragedy in the form of the loss of her fiancé, who dies in an airplane crash. Sort of a slings-and-arrows-come-at-you and does she have the strength to face up to it.

LF: This is the script at Chesterfield?

ROTHBERG: An earlier version of it, called "Within You, Without You," is the one I submitted last summer. I also submitted the short story "Second To None" is based on, called "Relief."

LF: You did what a lot of screenwriters would cringe at: you sat there listening to your own dialogue read onstage. Any pleasant — or unpleasant — observations?

ROTHBERG: I’ve been working with the characters since 1996, so I’ve had a chance to really refine them. With my first screenplay reading in New York in 1994, hearing it read even by professional actors it was like, "Ouch! Did I write it that way?!" It was rougher. This time, maybe I’m just more confident in the characters and dialogue and scenario that I set up, [but] there was only one moment that was slightly jarring — I hadn’t set up the main relationship clearly enough. And you can’t hide from it when it’s up on stage… I had my notebook there, and I was going to take notes on things like this that didn’t work, where the structure was faulty. My pen was primed, but for the first half hour I was too choked up and teary. You think you’re brilliant: "It’s all working!" [laughs]

LF: As far as this production goes, there was no rehearsal. You sent off a script, "Hi, I’m Judi, will you read my script?" How did you find such quality actors who’d work free?

ROTHBERG: Somebody knows somebody who knows somebody. I made a lot of calls initially, met contacts through Robert Patton-Spruill [director of "Squeeze"]. Rob recommended actors like Eddie Rutkowsky who just did "Cider House Rules." Rob also enabled me to visit a film set where I was introduced to Esra Gaffin, who was a stand-in. I wanted Esra to read on "Second To None," and she’s connected in the Boston community, so I knew one actor who knew a lot of actors. It was like that Breck commercial: You tell a friend, they tell two friends, and so on. I also got recommendations from Kevin Fennessy Casting and Lynda Patton, who read a few parts as well.

The actors did it for nothing, but they won’t get nothing from it. If this goes to print, I’m loyal. Most actors I spoke to were very interested; you give them work, they want to work. Even for free. For film they know you’re making contacts, even though I’m not a producer necessarily. One hand washes the other, and they were very enthusiastic. I work my butt off for people who help me because I’m ambitious, and what goes around comes around. So they can be pretty sure that if I’m in a position to help them, I will.

LF: Does it help you as a writer to be an actor or vice versa?

ROTHBERG: I find freedom in being the writer as well because it takes the edge off JUST being the actor, instead of "how’s this piece coming across?" I produced a play in 1993, an adaptation of a novel, so I was working on someone else’s material. I was the producer, I starred in it, I adapted, wrote it, and it was pretty much the best acting experience I’ve ever had. I didn’t come offstage wanting to kick myself for things I’d missed. I concentrated on the whole project, and I could let go of pressure I put on myself as a performer. The writing complemented the acting, and the acting complemented the writing, because where I may be weak in terms of structure, I can trust my ear for dialogue as an actor.

LF: What was the logistical process of making this reading happen?

ROTHBERG: I spent 90% of my time on the phone or at the Xerox machine. I called area theaters and people suggested stages I didn’t know about. It’s about getting one friendly, helpful person who’s going to recommend you to someone else if they can’t do it themselves. I was fortunate through a colleague and some legwork to get the BU Theater. It was like Grand Central at my home, between the theaters and the actors’ incoming calls.

LF: Any advice for screenwriters considering a staged reading of their script?

ROTHBERG: Have a good script that actors are going to be psyched to read. Have as strong a script as possible, yet be aware that you’re asking people for their feedback. Try to remember what you promised everybody. Make it easy for people to show up for you. Ask them to look for your errors. Try to bring industry people in so the actors are being seen as well. In terms of spaces you use, I try to leave mine in better shape then when I got there. And feed actors! If they’re traveling and you can’t pay parking, at least give them food.

LF: You said prior to the reading that this might be the only chance you get to "see" this script acted out.

ROTHBERG: Anyone looking at this profession will say, "Yeah, the odds are completely against anything ever happening and this going any further," so I was very grateful to people who came. After the first half hour of choking up I was really listening, and I also wanted to see the faces bringing these people to life. But I definitely felt like "this could be it, the only time these characters come to life," and if this was it, I wanted to soak it up.