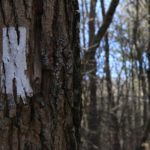 Trail angels have become an integral presence along the Appalachian Trail (A.T.) and other long distance hiking trails across the country. In general, trail angels perform random acts of kindness and assistance (often referred to as trail magic) to thru-hikers along remote stretches of trail where access to water and other amenities are limited or non existent.

The trail magic they perform often occurs unexpectedly and without warning in the form of fresh water, food, shelter, or a car ride to the nearest town. They know how important it is for thru-hikers to complete the trail in its entirety. Therefore, they understand the hardships of hiking a long distance trail and often appear when a thru-hiker needs help or encouragement the most.

For the past ten years, Apple has been setting up a large tent equipped with a wood burning stove in a remote corner of Nantahala National Forest in North Carolina. By mid November, southbound thru-hikers, who started their journey on top of the 5,268 foot peak of Mount Katahdin in Maine, will have walked about 2,000 miles by the time they reach Apple’s shelter just 111 miles from the southern terminus located in northern Georgia. As if appearing out of nowhere, Apple’s shelter offers a brief respite for thru-hikers before they forge ahead to reach the summit of Springer Mountain in Georgia.

For one week in November, White Blaze follows Apple as he supports weary southbound thru-hikers along the Appalachian Trail by offering them food, water, and encouragement to reach the end of the famous 2,178 mile wooded footpath. White Blaze examines the brief encounters experienced between thru-hikers and one trail angel.

Director(s) Bio:: Brian Bolster is an award winning filmmaker. His films have been featured on Atlantic Video, Aeon Video, United Airlines, and screened at numerous film festivals around the world including - Sundance Film Festival, Slamdance, Camden International Film Festival, True/False, Florida Film Festival and DOC NYC among others. In 2014, One Year Lease won Best Documentary Short at the Tribeca Film Festival and was nominated for a 2015 Cinema Eye Honors for Outstanding Achievement in Non Fiction Short Filmmaking. His short documentary, The Lookout won the Big Sky Award at the 2012 Big Sky Documentary Film Festival in Missoula, MT.