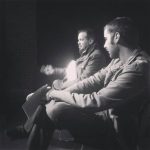 When Arthur Harris finds himself the subject of an interrogation and accused of killing his wife, he must convince Detective Lara Cullen of his innocence. When Lara pushes Arthur over the edge the truth is revealed.

Director(s) Bio:: Dan Rosario is an independent writer, director, producer and cinematographer. He has produced award winning music videos and public service announcements over the past 20 years. Winner of two Bronze Telly Awards and a Cine Golden Eagle, Dan has focused his most recent efforts on creating STATIC, a short film centered around a man accused of committing a crime. Dan has worked on short films and television commercials as cinematographer and various other technical roles. From building sets, to lighting, directing, editing and visual effects, Dan’s contributions are all about creating the very best possible.
Dan has 28 years of Law Enforcement experience, 21 years in the Major Crimes Division/Detective Bureau. He is bi-lingual, speaking Spanish fluently.

Nicholas Jon Beaubien, born in 1985, calls Providence, Rhode Island his home. After receiving an associates degree in video and radio production at New England Tech, he took his talents out of the classroom and into the world of advertising where he was able to build a strong body of broadcast commercial work. Having worked with some of the most iconic brands in the world, Puma, Star Wars, Transformers, G.I.Joe, My Little Pony...etc, Nicholas decided to focus his efforts on storytelling in film. 'Static' will be his third short film directorial effort.