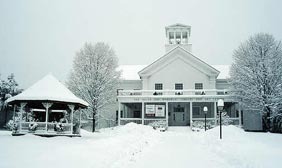 A Woman for Our Time: Barbara Van Dyke of Stowe Film Society

Share
Exploring her exceptional career from Associate Producer of 'Hiroshima/Nagasaki' to founder of the Stowe Film Society.

Once a month, the faithful flock to Vermont’s Stowe Village to sample the latest Epicurean stew of independent films presented at the Helen Day Art Center. A recent evening featured outtakes and declassified reels of World War II that depict the Atomic Age. "Hiroshima/Nagasaki: August 1945," released in 1970 by legendary documentary filmmaker Erik Barnouw, Paul Ronder, and Akira Iwasaki, uses footage shot by Japanese cameraman Iwasaki before the arrival of American ground troops. An animation short, "Fable Safe" (1971), by Barnouw, John Osborn, and Tom Glazer, depicts a cartoonish race for nuclear weapons. And Kevin Rafferty’s "Atomic Cafe" is a "chillingly humorous compilation of newsreels and government films of the 1940s and ’50s."

Behind it all is Stowe Film Society’s founder and key programmer, Barbara Van Dyke. She worked on "Hiroshima/Nagasaki," in the late ’60s. It was her first stint as a producer.

"Eric Barnouw asked me to be an associate producer on ‘Hiroshima/Nagasaki’ while he was away. The editor, who became the director on the film, was always forgetting things. I’d complain at night to [my husband] Willard. He said to me, ‘That’s what an AP does.’ After 17 years of housekeeping and raising children, I had found a job that used my skills," said Van Dyke.

During the war, the city was decimated. No one understood the effects of radiation. Iwasaki, a Communist, had asked permission to go and photograph a few weeks after the bombs were dropped, according to Van Dyke.

"The Japanese didn’t normally film themselves," said Stowe film patron Lynn Jeffries of the rare footage. "[Barbara] didn’t want people to look away [from hard-to-watch images] and tried to have one segment removed."

Jeffries was moved to tears by the film. "The [director] hid reels he couldn’t find later [because] the U.S. government wanted to confiscate the films," she said.

"How do we get people to recognize the horror and look at the unlookable? You wince and you look away," Van Dyke said. "[Some victims’] eyeballs melted because of the heat [and radiation]. A retractor is pulling the eyelid back and away. It doesn’t need to be seen."

"Paul [Ronder, the co-director] was showing the reality of the damage implicitly," she added.

Barbara Van Dyke’s intimate knowledge about the films screened, and her often personal relationship with the filmmakers, add a deeper level to the movie experience for the audience.

"To me, storytelling is the cultural tribal fire, and I take it very seriously. It is how we define ourselves," Van Dyke said. "Good storytelling depicts part of our humanness, and it does it in a way that maybe we have not thought of before."

An informal dialogue usually occurs after each screening, with Van Dyke, who speaks in clipped, even tones, taking questions from the audience. People actually lean in to listen when she talks.

"This has been Barbara’s life work, said Johanna Darrow, executive director of the
Helen Day. "But the art center has always wanted to have a film program."

Born in the ’30s
"I grew up in Chicago, [where] a film of dust covered everything," Van Dyke said.

The experience of growing up in the Midwest in the 1930s, during the dust storms that turned American farmland into desert, greatly influenced her. The ’30s was also the decade of a second wave of documentary filmmakers. The first had been "explorers," and now the second wave were "advocates" who linked the role of government and industrialization to the destruction of the environment. Movies like "The Plow That Broke the Plains" (1936) and "The Grapes of Wrath" (1939) highlighted the extreme conditions that prevailed during the Depression.

"During my high school years, one day, I walked into the assembly. I saw the [Pare] Lorenz film ‘The River’ (1937). Nobody asked me a single question afterward, but I understood [what had happened on the screen]. Willard did camerawork on the film,"
she said.

Many years later, the documentary filmmaker and director Willard Van Dyke would become her husband. It was only after they married that she discovered he had worked on "The River." Willard also directed "The City" (1939), produced for the New York World’s Fair and considered one of the most impressive expositions of the urban crisis many cities were now facing.

The changing world still afforded women few options. "The choices for women when I was young were to become a secretary, a schoolteacher, or a homemaker–if you were really ambitious, a dental hygienist," Van Dyke recalled. "My teachers always wrote that ‘Barbara is conscientious.’ But I didn’t want to be conscientious."

This yearning to express a creative impulse led Van Dyke to New York, and into the world of film.

"I had no idea that I would become the first woman in charge of the North America International film seminar [or] the AP for ‘Hiroshima/ Nagasaki.’ [Eric] Barnouw asked me to coordinate the Flaherty [film seminar]. I had no idea how to do that."

She has worn many hats in her 40-year film career: producer, executive director of the International Film Seminar and coordinator for the Robert Flaherty Film Seminar for 18 years, international film programmer, and public television executive.

"One thing leads to another, and to the next thing. You do each job to the best of your ability," she said.

Film Society
Now in its second season, the film society’s calendar is full of international films highlighting the most significant social and political changes of our times. Van Dyke and her longtime friend and collaborator Lillian Mauer, the film society’s film chairman, previewed films from several countries.

"We thought we’d take a look at the major events of the 20th century [and see how they were interpreted by Hollywood]," Van Dyke said. "What kind of a reflecting mirror is [film] in our culture?"

The Stowe Film Society has added a second night of films to its second season lineup. Film enthusiasts can now see films on Saturday nights in addition to regular Monday night screenings.

"It’s a kind of mix of favorites of mine and Lillian, trying to present those films that are worthy of being remembered and seen, [films that] 90% of our area has missed. We’re not in the business showing things can be seen at a cineplex," said Van Dyke.