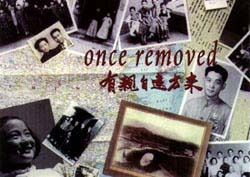 Julie Mallozzi’s outlook is distinctly American. Her documentary "Once Removed" raises awareness not only of a struggle against assimilation and Americanization, an almost universal experience for 20th-century Americans, but also of the very large issue of past and memory, and what belongs to whom. The daughter of an Italian-American father and a Chinese mother, Mallozzi grew up in Ohio, working in the family business as a tour guide at the Olentangy Indian Caverns. "I knew all about the Ohio pioneers," Mallozzi says, "but I didn’t know the names of famous people in my own family."

"Once Removed" is about the filmmaker’s journey to China 50 years after her mother’s immigration to the U.S. In just under an hour, Harvard grad Mallozzi takes the viewer on a tour of two Chinas: contemporary China and the China of the Cultural Revolution. Perhaps because of the film’s length and vast scope, Mallozzi’s journey is overwhelming at times. Moving from her relatives’ apartments to the family’s ancestral home to the reputed site of her uncle’s execution, the viewer has little time to become grounded in any one place, making it difficult to be moved by any of the images that flash before Mallozzi’s camera.

A general lesson in modern Chinese history would have been helpful to understanding the intricacies of the country’s changing political climate, but it is personal history that is primary here. Several members of Mallozzi’s family witnessed firsthand the effects of the Cultural Revolution of 1966 to 1976, scientists and intellectuals who have lived to tell about their experiences, and tell about them quite articulately. To a person, Mallozzi’s relatives are remarkably at ease in front of the camera, speaking with authority and intelligence. In fact, the greatest strength of "Once Removed" is its interviews. Mallozzi’s uncle, a scientist-turned-janitor who survived the Revolution, calls the Cultural Revolution "the Ten Wasted Years" (other sources call it "the Ten Years’ Disaster"). This man is living history, and the viewer is privy to visual and spoken evidence of what was lost in terms of time and progress.

Mallozzi’s stated goal is to connect to the China of her older relatives. Juxtaposing colorful film footage of a 1980s Communist parade with a sepia photo from the early 1900s, Mallozzi says, "I find myself looking for the old China of my grandparents’ scrapbooks." This is the thread that runs through most of "Once Removed," and Mallozzi, so intent on "her" past, at times fails to connect with her present. She says she and her traveling companion, cousin Mimi, "haven’t really clicked. She’s interested in new things, and I seem only interested in the past." This is certainly borne out in the film. There is some distance between Mallozzi and her living relatives, a distance lessened on the surface because she speaks fluent Chinese. Perhaps this distance affects the viewer as much as Mallozzi herself. One never learns who these people are now. Is Mallozzi’s physicist aunt currently a practicing physicist, or did her experiences during the Cultural Revolution prevent her from returning to her profession? We have no way of knowing, as we only see her preparing dinner and talking about what happened years ago.

"I need to recover my family’s past because I’m afraid of living without memories," Mallozzi says. Whose memories, though, will she be living with? Retracing the final walk of their cousin Fei Gong, a university radical killed by the government and then hailed as a martyr, Mallozzi and Mimi cannot find the chemical pool in which his body supposedly dissolved. The pool obviously no longer exists, and Mimi posits that it never did. "What’s important," Mallozzi wonders, "the thing that happened, or the thing that’s remembered?" Perhaps we can pose that question to Mallozzi herself, with a slightly different spin: When does a thing that happened to someone else become a part of your own memory? And how exactly is the past passed from one generation to the next?