Dirty Night Clowns is a wonderful tale of curiosity, danger and pursuit. Although its never known what the path ahead has in store, Chris takes a journey driven by his nervous curiosity to find the nefarious character who roamed about his house while he slept. What seems scary and evil from a distance might end up as something unexpected as a cast of characters lures Chris in for a special ending.

New England Connection: Ryan Gibeau was born and raised in Manchester, NH. He studied film production at Emerson College and, in 2006, became a member of Local 481 and has worked on several feature films in MA, CT, NH and RI.

Director(s) Bio:: Ryan Gibeau is a New Hampshire born filmmaker. Upon receiving a degree in film production from Emerson College in 2005, Ryan began working on independent features and commercials in Boston, which led to his induction into Local 481, New England's Film Union. After three years experience lighting films such as Gone Baby Gone, Ghost of Girlfriend's Past and Gameplan, Ryan relocated to New York City to continue working as a filmmaker, director and cinematographer while developing ROCK*iT FiLMS, a film production company conceived of earlier in his career. Since 2009, Ryan has been living and working in NYC creating content for record labels and creative agencies and continues to approach projects with passion and creativity establishing himself as a trusted NYC creative.
In 2011, Ryan's music video, Dirty Night Clowns, won the award -- best animated film -- at the New Hampshire Film Festival in Portsmouth, NH. 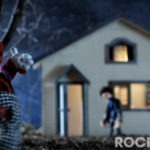