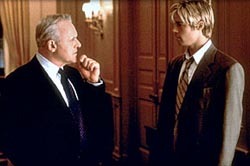 Share
As opposite as life and death, the acting abilities of Anthony Hopkins and Brad Pitt come through in this mediocre Rhode Island film.

And you thought YOU had problems. In director Martin Brest’s "Meet Joe Black" (loosely based on the play "Death Takes a Holiday"), the Parrish family is just trying to have an intimate dinner – as intimate as dinner can be in an immense Warwick, RI, mansion – when Death, in the guise of Joe Black (Brad Pitt), shows up at the doorstep. Apparently, William Parrish, the 65-year-old patriarch (the always impressive Anthony Hopkins), is on the verge of a fatal heart attack, and Death makes him an offer he can’t refuse: if Parrish allows an incognito Death to accompany him in his daily life and "have a look around" at life, then Parrish will gain some extra precious moments on earth. Add Parrish’s daughter Susan (Claire Forlani) as Death’s love interest, and some unintriguing corporate intrigue, and you have over three hours of a movie that’s… okay as it is, but disappointing in that it could have been so much better (and a little shorter).

With ample access to the oh-so-fetching Susan, Death soon discovers that love is what makes humans cling so dearly to life, and that, as Parrish tells his daughter, "To make the journey [life] and not fall in love – you’ve hardly lived at all." Death also grows to appreciate some of the other finer things in daily life – peanut butter, for instance – but maddeningly, he stays with the same family, and lives in their limited lifestyle of the rich and famous, instead of experiencing the myriad wonders and experiences this world has to offer. One could argue that after Death finds what he thinks is love with the only single woman he meets, he has all that he needs, but you’d think he would listen to a symphony, or walk in the woods, or something.

Unfortunately, that’s only one of the many themes – including true love, loneliness, leaving a legacy, living life to its fullest, varying degrees of parental doting – that should be at the core of the film, but instead is pushed aside by a contrived plot of crooked wheelings and dealings within Parrish’s international communications company. Writers Ron Osborn and Jeff Reno’s insistence on wasting so much time developing this run-of-the-mill plot, instead of fleshing out the relationship triangle of the three main characters-Joe, Susan, and Parrish-is the biggest mistake in the film, reducing it to another "Ghost," instead of elevating it to the level of "Truly Madly Deeply."

The wide range of acting skill displayed in "Meet Joe Black" begins with Brad Pitt. He brings nothing special to his role as the Grim Reaper, relying mainly on walking stiffly, glancing about wildly, and being blond, but does a passable job in the fish-out-of-water scenes. Claire Forlani, actually quite good, does her best in a role that needs further development. And as for Anthony Hopkins, he brings life (no pun intended, none denied) to every frame of film lucky enough to have him. He steals every scene that he’s in, not because of "you can’t handle the truth!" – like scenery-chewing, but because he can Act. When he says to himself, as he looks over his lavish birthday party, "65 years… Don’t they go by in a blink," one can hear in his voice the longing for lost youth. And near the end of the film, Parrish meets Death for their Long Walk together, only to discover (in one of the movie’s best scenes) that being Death is really a lonely, isolated way to live. In this scene, Parrish tells Death, "It’s hard to let go," it’s enough to break your heart. "Yes, it is, Bill," answers Death. "Well, that’s life," adds Parrish. "What can I tell you?"

There are a few missteps of note, not the least of which is Joe Black’s Island accent, which he adopts in order to talk to a mystical older Jamaican woman (Lois Kelly-Miller in a time-honored limiting role). And if he’s so knowledgeable about something like Jamaican English, why would he know nothing about, say, what to do when passed a basket of rolls at the dinner table? Dat ting no irie, mon.

Technically, "Meet Joe Black" is fine, but not spectacular. The score is disappointingly generic. The editing and cinematography are, for the most part, straightforward and unobtrusive. One event fairly early in the film will make you gasp out loud, and a few scenes – Parrish’s heart attack, Death’s shimmering first appearance, Susan and Joe’s lovemaking – have some pizzazz, but they, like the rest of the film, beg the question, why isn’t this film better?