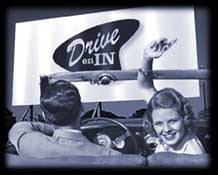 Back to the Big Screen: Drive-In Theatres

Share
You may be surprised to hear it, but the drive-in theater, that icon of the 50's, is experiencing something of a resurgence. This month, the Drive-In Theatre Fan Club holds a special meeting and double feature in Vermont. And, you're invited...
If you’re tired of paying extra-large prices to watch movies on matchbook-sized multiplex screens, a trip to your local drive-in theater might be the thing to remind you how movies are supposed to be seen: on the big screen. A really big screen.

You may be surprised to hear it, but the drive-in theater, that icon of the Fifties, is experiencing something of a resurgence. Screens that have been closed for years are reopening daily, and theaters that have limped along quietly for decades are not only improving their facilities, but expanding them, adding additional screens to the property. Drive-ins are out there, if you know where to look.

The Drive-In Theatre Fan Club knows where to look. Dedicated to the restoration and revival of big screens languishing throughout the country and abroad, the Fan Club will hold a meeting for members and anyone else interested in drive-in theaters on Saturday, September 19, at the Fairlee Drive-In/Motel in Fairlee, Vermont. On Sunday, club members will travel to the Meadows Twin Drive-In in Woodsville, New Hampshire, to tour that theater and see the results of recent renovations.

With more than 450 members worldwide, the Drive-In Theatre Fan Club serves as a clearinghouse for information about the state of the drive-in, updating members about theatre openings and closings, posting record drive-in box office receipts, and keeping tabs on properties that might be ripe for restoration. According to Gregg Anderson, the Massachusetts representative of the Fan Club who organized the Fairlee event, Club meetings are never members-only, and sometimes they even share the bill with events like classic car shows to reach a wider audience. Meeting sites are often chosen for their potential interest to Fan Club members.

The Fairlee Drive-In is something of a novelty, one of only two drive-in/motels remaining in the country, with every room wired for sound. There is space for about 400 cars in front of the 90-foot-long by 45-foot-high screen tower. Supplementing a loyal local audience are people who may travel more than an hour every weekend. Like most drive-ins, the theater is only open Friday through Sunday, but business is good. "It’s paying for itself; otherwise I wouldn’t have put a new screen up," says owner Ray Herb, Sr.

Chalk the revival up to nostalgia, in part. "On a nightly basis at least five people say to me, ‘I haven’t been to a drive-in in 20 years,’" says Anderson, who also works the box office at a theater in Mendon, Mass. But the audience contains more than people revisiting their youth. The drive-in is a social event that appeals to everyone—teenagers, middle-aged people, older people. Families comprise a good portion of the audience, highlighting an economic reason for the drive-in revival—like many other forms of family entertainment, regular movies cost too much. If you have young children, you can’t beat the price at the Fairlee: $5 a head, with children 11 and under free. Says Herb, "You’d be surprised, there are a lot of 11-year-olds."

Drive-In Makes it On the Big Screen
The Northfield Drive-In located on the Massachusetts-New Hampshire line will be the setting of a scene in the upcoming Miramax film, "Cider House Rules." The movie is based on the best-selling book by John Irving, set in New England during World War II.

The Northfield Drive-In Theatre will be featured in a scene where characters Homer (Tobey Maguire) and his girlfriend attempt to visit a drive-in theatre, only to discover that the movie will not be shown due to the war-related blackouts along the east coast.

"Cider House Rules" will be filmed at various New England locations, including Maine and Vermont; about three evenings of filming will take place at the drive-in.

The Northfield Drive-In Theatre is an appropriate setting for the movie, as it dates from the same era. In fact, the theatre is celebrating it’s 50th anniversary this year.Filming will begin there in late September or early October.

On an other note feature films will be shown at the theatre through Labor Day weekend. According to owner Mitchell Shakour, the drive-in hasn’t changed a great deal in it’s 50 years. While the sound technology now features radio sound, the drive-in still has some of the authentic 40 to 50 year old speakers. The drive-in is located on route 63 on the Mass/ New Hampshire line.

A Drive In Theatre Near You

There are over 20 active drive-ins in New England, with about a dozen in Massachusetts and Maine. Check out your local drive-in scene at:

The Fairlee Drive-In/Motel in Fairlee, Vermont, will host the Drive-In Theatre Fan Club on September 19, 1998 with a double feature.For more information, see the listing in NewEnglandFilm.com’s Event section.

For more information about the Drive-In Theatre Fan Club, visit their website at www.driveintheater.com/fanclub/ or contact the Club via drivein@erols.com or Gregg Anderson at gregg.anderson@state.ma.us

The Fairlee Drive-In/Motel in Fairlee, Vermont, will host the Drive-In Theatre Fan Club on September 19, 1998 with a double feature.For more information, see the listing in NewEnglandFilm.com's Event section.For more information about the Drive-In Theatre Fan Club, visit their website at www.driveintheater.com/fanclub/ or contact the Club via drivein@erols.com or Gregg Anderson at gregg.anderson@state.ma.us Photo from http://www.drive-on-in.com