If your girlfriend had the flu, would you still kiss her? What about if she might have viral Meningitis? For David, the answer is simple. Absolutely not. Unfortunately, David’s girlfriend doesn’t see it this way.

Director(s) Bio:: After graduating from Harvard University, Tyler moved to Los Angeles to pursue stand up comedy. Since then, he has toured around the country and had his own weekly show at the Laugh Factory in Hollywood.
Shortly after moving to Los Angeles, Tyler "punched up,"co-produced, and directed second unit for the feature horror film The Shortcut which was bought by Anchor Bay and STARZ. He then co-wrote an animated feature and sold it to Sony Pictures.
In the commercial realm, Tyler has directed Television spots for Gillette, Nickelodeon, Freshpair.com and the Sony Pictures movie Bucky Larson: Born to be a Star. He has directed internet commercials for companies such Bacardi, Samsung, AT&T, Mike's Hard Lemonade, and Garnier. In addition, he has directed movie promos for Just Go With It, Columbiana, The Expendables, and Burlesque.
Recently, Tyler directed an episode of the Comedy Central television show Nick Swardson's Pretend Time and the FOX comedy Breaking In starring Christian Slater. In addition, he has directed second unit for the Sony Pictures features Grown Ups 2, That's My Boy, and Jack and Jill. Tyler is currently producing and directing for Chelsea Lately.
Tyler has acted in various films including Funny People, Mall Cop, The House Bunny, and You Don't Mess with the Zohan. 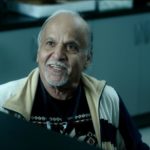