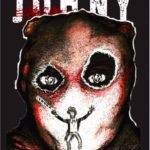 Johny is a small town executioner, slaying sinners who break the law. But Johny doesn’t want to be an executioner….he’d rather be a dancer.

New England Connection: The entirety of JOHNY's cast and crew live in and around Portland, Maine. Our location, a large farm, is located in Acton, Maine.

Director(s) Bio:: Taylor (TJ) Hunter is a director from Salt Lake City, Utah but currently lives in Portland, Maine. He has directed a number of short films including End of Cult, The Most Precious Thing and JOHNY.