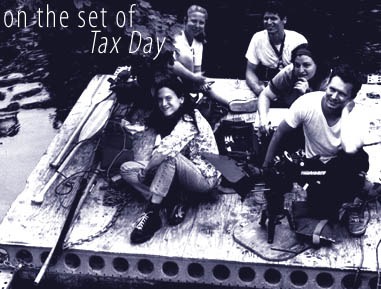 In a recent email interview, filmmaker Laura Colella ponders local productions, film funding and women in the industry. Her film Tax Day, which she received a special equipment grant through the Sundance Institute to complete, portrays two young women on their way to the post office on "Tax Day" who embark on an exploration of a variety of landscapes and lifestyles.

I discovered the possibility of being a film major at the end of my first year at Harvard. I had been involved in theater since I was very young, and found filmmaking to be a perfect synthesis of all the things I liked to do. As a student, I completed two short films through to the print stage (with optical soundtrack), The Same Ark and Eyes of a Blue Dog. The former is a five minute film shot in Volterra, Italy, and the latter was my thesis project.

funding in the arts…

Since graduating [from Harvard University], I made a half-hour short called Statuary that was funded by grants from the Rhode Island State Council on the Arts and the New England Foundation for the Arts. This film has been shown in about 50 venues internationally, including over 20 festivals, where it won 10 awards. I mention this not only to blow my own horn, but also to bring up a point about how important grants have been to me. I have also received a fellowship from RISCA [Rhode Island State Council for the Arts], and a small grant for my current project. I think that the importance of arts funding is generally misunderstood and severely understated. Without it, there will be a significant decrease in the variety of, and accessibility to new art and non-mainstream ideas. As a filmmaker and film viewer, the prospect of only being able to make or see films with content that falls into the incredibly narrow scope of what is considered commercially viable is awful. This subject deserves an article on its own, but I thought it should be at least mentioned.

My film was funded with a Limited Liability Partnership that we named Lucky Pictures. There are two General Partners, myself and John Lavall, who is also from RI, but whom I actually met at the New England Filmmakers Society’s screening of Statuary. Then, there are a number of investors, the limited partners, most of whom I did not know before this project. Although my feature Tax Day does not sound wildly marketable to most people, we were able to inspire confidence in a series of investors that it would be a good film with the potential to make a profit. I think the general buzz about independent film has raised the average person’s awareness of this type of proposition. I think that the specific information about the project that most encouraged investors were Statuary’s festival awards, the fact that I went to Harvard, and the donation of an Aaton camera package through the Sundance Institute.

the making of Tax Day…

I wrote the script for Tax Day very quickly last November because someone who had seen Statuary called me to suggest that I submit to the Sundance Screenwriting Lab. After seeing Statuary and reading the script for Tax Day, they turned me down for the Screenwriting Lab, but then called me a couple of months later to say that they would try to get me a donation of a camera package from Aaton. This is something that they want to start doing once a year for a filmmaker. The Aaton package was approved, and we filmed from June 8 through July 5.

Our budget is very low, but the film really looks much more expensive, mostly due to the technical excellence of the Director of Photography, Richard Rutkowski. The crew was fantastic—unpaid, but nonetheless very committed and competent, and included some professionals and several film students from Brown and Rhode Island School of Design. It was a shame not to pay people, especially those who worked long days, six days a week, but this would have at least doubled the budget. The cast was also unpaid, and the project had an experimental agreement with SAG. There are over one hundred featured individuals in the film, and over a hundred other extras. The cast is a combination of friends, including many local artists, and people that responded to casting calls. The main two actors live in Massachusetts, but almost everyone else is from Rhode Island.

[Tax Day] was shot entirely in Providence, with mostly exterior locations. The Providence Film Commission has been an enormous help to us, especially in terms of getting access to locations. I have loved shooting in Providence since I began making films. I made my main junior and senior student films here, as well as my short Statuary. Providence has great locations as well as a high concentration of talented artists. I had lucky timing because my first feature coincided with a new interest in film production here, and the establishment of the extremely supportive Film Commission.

I utilize a number of [Rhode Island] locations, very often creating scenes inspired by a particular location. In general, as with many low budget films, the success of the shoot depended on the favors and generosity of many people. In pre-production, I announced casting calls via the SAG [Screen Actor’s Guild] and Stagesource hotlines… All of my funding to this point has been local, but now that I’m looking for distribution and a 35mm blow-up, I am looking to companies in New York and Los Angeles.

Sometimes I look up specific sights on the web, but I’ve been too busy to spend a lot of time browsing. I’m sure that at this point in the process, I’ll be using it more now to find something out about different companies, festivals, etc.

on women in the industry…

Up to this point, I’ve felt that being a woman has probably helped as often as it has hurt. I have a suspicion that when it comes to marketing a film, or entering even a low budget commercial realm, there’s some sexism out there. Certainly films oriented towards male viewers are considered more marketable. I have a theory that companies are more likely to take a chance on an unknown male filmmaker with a non-mainstream film than a female one, but this is only based on [what] I’ve seen.