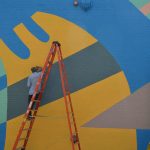 This time-lapse film captures 16 days of work on the Oak Street mural, a new addition to the cultural vibrancy of Rockland’s downtown. The project was guided by local community mural artist Alexis Iammarino who runs SaturdayStudio at the Rockland Recreation Center. She was joined by two professional Baltimore-based mural artists, “Jessie and Katey”, who have been collaborating on large-scale murals and installations across the country since 2001. The mural was also completed with help of local artists and volunteers of all ages.

Director(s) Bio:: Alexis Iammarino is an interdisciplinary artist and educator who does regular public and mural arts work with The Farnsworth Art Museum, The Center for Maine Contemporary Art, and Rockland After School Alliance's Arts in Action.

Scott Sell is a freelance cinematographer, editor, and writer. He has worked as a reporter, a writing and multimedia teacher, and most recently, as the Island Institute's in-house filmmaker.