What My Friends Do On A Saturday Night 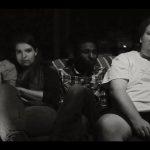 A young man invites his ex to a party and has to accept that she is moving on from their relationship, even though he may not be over her.

New England Connection: All the cast and crew were locally from New England and the film was shot entierly on location in Maine.

Director(s) Bio:: Born in Gorham, Maine, Ryan Weed began his interest in films when he was shown Star Wars at a young age. He started creating short claymation videos in middle school and moved towards filmmaking while taking video production classes while attending Gorham High School. He then attended Southern Maine Community College where he majored in Communications & New Media. While attending he co-created the short-film The Wedding Cake House: Truth Behind the Myths which played at the Maine Mayhem film festival in 2013. He would then attend The University of Southern Maine where he majored in Media Studies with a focus in Cinema Studies. After graduating he wrote and directed the short film Before I Was Young which played at the 2016 Maine International Film Festival and its sister festival MIFF-By-The-Sea. He enjoys films of all genres and likes watching from by David Fincher, Rian Johnson, and Judd Apatow. He currently co-hosts the talk radio show Cinema Hits & Misses on WMPG while working freelance.