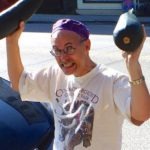 Sunburned face, scratched up knees; my garden’s choked with zucchinis! Every August, Vermont gardens go viral with gigantic zucchinis. Hidden under enormous leaves, they grow so fast in summer’s heat that they become oversized and tough before gardeners know they’re there. Free zukes can often be found at the ends of people’s driveways. But what if all your neighbors have the same problem? What if nobody wants them? And what if you forget to, say, lock your car? Desperate times call for desperate measures!

New England Connection: The film was produced entirely in Vermont. It was shot in Morrisville. It was conceived, written and edited in Montpelier. The actors and crew are all from Central Vermont, with the exception of Don Bateman, playing the Zucchini-Evil-Doer, who calls Burlington home. The zucchinis were purchased at a farm across the road from where the Cinematographer lives in Johnson. The music used in the production was performed by Pete’s Posse, a trio consisting of Vermonters Pete Sutherland, Tristan Henderson and Oliver Scanlon.

Director(s) Bio:: Kenric Kite is a lifelong Vermonter, at least thus far. In 1963, his mother found him under a zucchini leaf in Springfield, and he misspent his elementary years in Burlington before being kicked out and remanded to South Burlington Middle and High Schools. There he volunteered in the AV department, delivering TVs and film reels to classrooms, during which time he became quite adept at extricating his mangled fingers from between the film projector gears. After that he actually made something of himself in the Communication Arts & Sciences program at Lyndon State College and somehow managed to graduate in 1990 with honors and a BS degree in Technical Video Production. Lyndon wished him well, then promptly changed the locks.

Inexplicably, Kenric was hired right out of college as a PA for a local PEG station in Montpelier, then operated by Adelphia Cable. After a time Management, being dissatisfied with Kenric, promoted him, gave him a desk which he barely clung to (remember the mangled fingers?) while he ran all of the facility operations. When the station went non-profit, Kenric somehow finagled the Executive Director job at the newly-formed ORCA Media, holding that post for seven years.

In 2012, Kenric saw yet another perfect opportunity to make something of himself, and went independent as a producer. He formed his own production company, Kitestring Media, with video gear assembled from bicycle parts and duct tape. In 2014, while Kenric was “indisposed”, he remembered a time in his youth when he had picked the overgrown zucchinis from the garden and put them in a box marked “FREE" by the curb, only to have the box taken and the zucchinis left behind. He thought to himself, “AARRRGH! There MUST be a better way!” and the idea for 'Whaddya Gonna Do with All Those Zucchinis?' was hatched.

This short film is Kenric Kite's first foray into the realm of comedy production. He is astonished that it has been accepted into two festivals, especially when one considers it was shot with about three weeks of planning, borrowed props, and a lunch money budget. He thinks maybe next time he should do one on Christmas fruit cake. 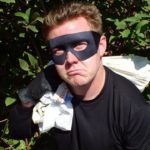 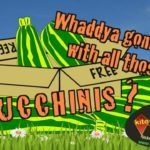