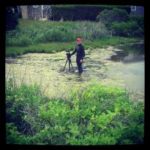 For decades, nutrients from human waste have been seeping out of septic systems and into the groundwater. Excess nitrogen and phosphorus now threaten a majority of Cape Cod’s estuaries, endangering critical ecosystems, the shellfish industry, and tourism-reliant economies.

In revealing portraits of the people affected by nutrient pollution, THE WATERSHED brings this mostly-invisible problem into sharp focus. For shellfisherman John Perry, algae has choked out the once-abundant quahog habitat in his backyard estuary, putting his livelihood at risk. Emma Jo Mills is a Wampanoag artist who grew up eating fish from Santuit Pond. Thirty years later, the algae pollution is so bad she no longer can eat the fish and rarely ventures out to kayak.

With input from scientists, aquaculture experts, and local oyster farmers, this short documentary offers the natural filtering capacity of shellfish as a partial solution to the problem. But despite the promises of aquaculture, is it too much to ask Mother Nature to solve the problems of over-development?

Director of photography and editor Daniel Cojanu is a native of Romania who has lived on Cape Cod since 2008.

Animator Jeremy Mayhew grew up and lives in Chilmark, on Martha's Vineyard. The film was financed by the Association to Preserve Cape Cod, the oldest environmental non-profit organization on Cape Cod.

Director(s) Bio:: Elise Hugus (producer/director/writer/sound) and her partner Daniel Cojanu co-founded UnderCurrent Productions with a mission to tell science stories with a human message. A 2006 graduate of the communications and journalism program at Concordia University in Montreal and the Danish School of Journalism in Aarhus, Denmark, Elise has contributed to print, online and radio outlets in the US, Canada and Europe. The Watershed, which won an audience choice award at the 2014 Woods Hole Film Festival, is Elise's first film festival submission.