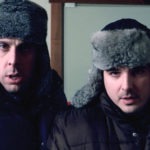 After a long day of driving, Brad and Roger decide to pull into a motel on a dark stretch of New Hampshire road. When they ask for a room, they think they can catch a bargain…
What they get are three motels, each one stranger than the last. Something bizarre is happening, and they’re not sure why. Is something being lost in translation, or is this place just not as it seems? They never thought something so easy could seem this impossible.

Director(s) Bio:: William Peters is a videographer who lives and works in Burlington, VT. He co-founded Hammer & Saw films with Actor/Producer Michael Mooney in 2009 and produced their first short film Motel They are currently at work on their next film, Exit 7A.