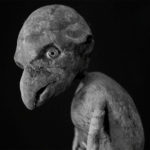 New England Connection: The writer/director/composer/performer of Singing in the Dark Times, Alan Magee, has been a year-round resident of Maine since 1976

His illustrations received numerous awards including a National Book Award in 1982, Awards of Excellence from Communication Arts magazine and from the Society of Illustrators, Playboy magazine’s Annual Editorial Award, and awards from the Art Directors Clubs of Los Angeles, Chicago and New York.

In the late 1970s Magee began to concentrate on his personal paintings and in 1980 presented his first solo exhibition at Staempfli Gallery in New York. Since that time, he has had annual one-person shows throughout the United States and Europe. In 1991 a ten-year survey, Alan Magee 1981-1991, traveled to four US museums. Archive, an exhibition of Magee’s black and white monotypes opened at the Berliner Philharmonie in November, 2000 and traveled to the Portland Museum of Art. An Alan Magee Retrospective exhibition opened at the James A. Michener Art Museum in 2003; the Farnsworth Art Museum, 2004; and the Frye Art Museum, Seattle, in 2005.

Books of Alan Magee’s paintings include, Stones and Other Works, published by Harry N. Abrams in 1986, Alan Magee 1981-1991, published by the Farnsworth Art Museum in 1991, and Archive, Alan Magee Monotypes, published by Darkwood Press and Spectrum Concerts Berlin in 2000. Alan Magee: Paintings, Sculpture, Graphics, a major book of the artist’s work, was released October, 2003. Resistance, by Barry Lopez, with monotypes by Alan Magee, was released by Knopf in June, 2004.

Magee has received awards for his painting from the American Academy and Institute of Arts and Letters and the National Academy of Design. Several documentary films have been made about his work including the Maine PBS production, Alan Magee, Visions of Darkness and Light, and Alan Magee, Maine Master by the Union of Maine Visual Artists. Alan Magee: art is not a solace, a feature documentary about the artist’s work, was released in September 2019 at (CIFF), the Camden International Film Festival.

Magee’s works can be seen in many public collections including The Fine Arts Museums of San Francisco, the Museum of Fine Arts, Boston, The Art Institute of Chicago, The National Portrait Gallery, the US Capitol, the Portland Museum of Art, The Delaware Art Museum, the Farnsworth Art Museum, and the Columbus Museum of Art.
Alan Magee is represented by Forum Gallery in New York, Dowling Walsh Gallery in Rockland, Maine,.
His work may also be seen on the internet at alanmageemusic.com and at https://www.alanmagee.com

Fear and the Unknown