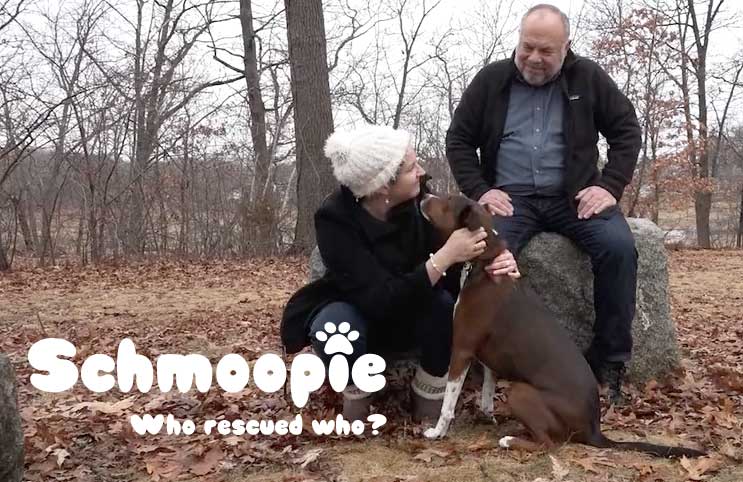 Mary C. Ferrara wrote, directed and stars in Schmoopie, about a woman, dealing with a breakup, gets an unexpected suggestion that changes her life.

Mary C. Ferrara wrote, directed and stars in Schmoopie, about a woman, dealing with a breakup, gets an unexpected suggestion that changes her life.

Can owning a dog help you learn to love again? The answer in Mary C. Ferrara’s short comedy Schmoopie is an unabashed “YES.” Schmoopie, which has screened in over 60 film festivals, including local ones like Boston International Film Festival, SENE, and Shawna Shea is now streaming through October 15 as part of the 2019 Online New England Film Festival. Ferrara also is a finalist for the New England Film Star Award. We caught up with triple threat (writer/director/actress) Ferrara about the rising success of her film, the casting process, and more.

Ferrara: I signed up for a film competition in NY. I just wanted to act in it and then the people chosen as producers backed out. I stepped forward to help produce and while it was tough, I found it rewarding. Afterwards I thought to myself: Why not write and produce my own film? So then Schmoopie was born. I did take film/video and screenwriting classes in college as well as write sketch comedy and a couple of episodes of a web series. I also have helped direct other people’s projects. I’ve acted more than anything else but in the last year really realized how much I like behind the camera stuff too.

Ferrara: I decided to write a film for the Women in Comedy Film Festival using a suggestion for an opening line that they supplied. The story is a bit inspired by my own life, dealing with a break up and my love of animals. It didn’t make it into that competition but Schmoopie has done extremely well since.

NewEnglandFilm.com: What was one of your most memorable festival experiences?

Ferrara: I have traveled to Augusta, Georgia and Albuquerque, New Mexico for festivals. The August Indie Festival was unique, they chose five films to screen in this little popcorn shop. The other four films were a very different vibe from Schmoopie but still, the audience was really interested in so many aspects of my little film, I was tickled.

Ferrara: The DP, Tim Labonte, I’ve known for a few years as he is the DP for web series I act in called Magicland. I knew comedy was his strength and really wanted his style for this project. Michael Maggiani I had known for a bit and had just ran into the week before I figured out who I wanted to cast. Because of running into him he was fresh in my mind and I realized he just had the right vibe for the character I was looking for. Stephanie, I had talked to a bit already about ideas I had for a film for the Women in Comedy Film Festival. When I wrote it I thought she’d fit it perfectly for the phone sales girl!

NewEnglandFilm.com: What  are you working on now?

Ferrara: I’m currently in production on Wallie’s Gals, a short film I wrote about 4 women who reunite after working at a discount clothing store together in the 80s. I’m real excited about this as we are trying to recreate the 80s for part of it. It also features 10 female actresses!

Ferrara: I’m still learning myself! I think the best advice is to work with a crew of people that you know really well and can trust. It always helps. And of course actors that have good reputations as well. It can really make the process go smoother. As far as sending to film festivals, definitely have a strategy. I didn’t with Schmoopie as I was new to this sort of thing. Target festivals that you think would really like your type of film, and target the biggest festivals first, as they like premieres.

NewEnglandFilm.com: Tell us about the name of your production company Call it a Whim.

Ferrara: Life is one big evolution, you never know what one passion will take you to the next. That’s why I called my production company “Call it a Whim;” because once I get inspired I go on a whim and do it. I try not to overthink, just “ride the wave and do it.”