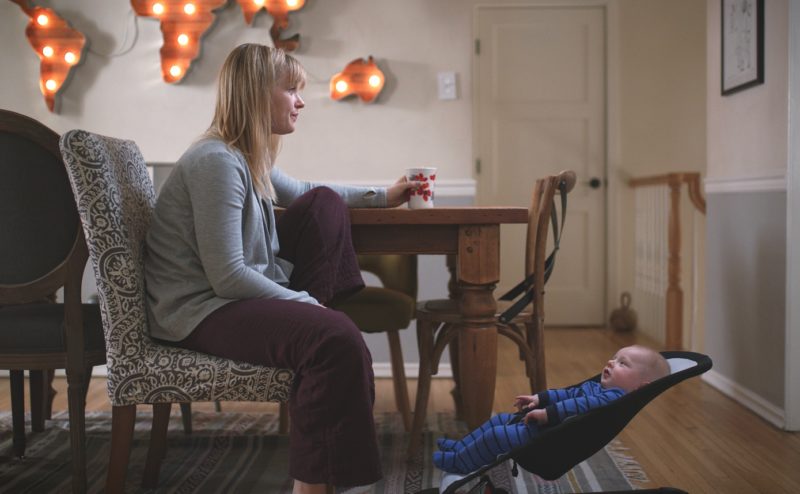 2019 FESTIVAL INTERVIEW: HAVE IT ALL

What does it mean to “have it all”? Is it attainable? Director/writer/actress Katie Locke O’Brien explores these questions in her film Have It All with a poignant, sharp, and funny lens, centering on a new mother trying to balance a baby and career. Based on her own life experiences, Katie’s character and performance of Jill depicts the reality that having it all is not only an illusion but a frankly ridiculous expectation.

Having screened at the New Hampshire Film Festival, Have It All is now streaming through October 15 as part of the 2019 Online New England Film Festival. The film was also selected as a finalist for HBO’s Insider Comedy Short Competition, a semi-finalist (top 15) for the NBCU Short Film Competition, it won the Jury Prize for all Narrative Shorts at Napa Valley Film Festival, the Audience Awards Jury Prize for Best Social/Political Film, and Best Comedy at a few other regional film festivals.

O’Brien grew up in Hampstead, New Hampshire, went to Pinkerton for high school, and went to Harvard as an undergraduate. And even though she lives in LA now, she still sees herself as “a New Englander through and through.” “In fact,” she says, “my first independent project—a web series I co-wrote and starred in—is called The Hub, and it’s all about life on the South Shore of Massachusetts.”

At NewEnglandFilm.com, we were curious about Katie’s inspiration, her blossoming career, and adorable baby and co-star, and she was kind enough to share some answers.

NewEnglandFilm.com: Can you talk about your journey to becoming a filmmaker?

Katie Locke O’Brien: For me, it was sort of a slow burn, and I think I held myself back from embracing that I was a “director” for a long time, specifically because I didn’t go to film school. In retrospect, it’s a dumb consideration that I let get in my way, but at the time, it felt like I needed that for legitimacy. In truth, I think I always was looking at storytelling from a director’s perspective. I began as an actress, and then moved into writing my own things…many of which I then also self-produced. And each time we were filming something new, my friends would always tell me that I should try directing. (They are very wise.)

But I held out until I couldn’t anymore—I was working on a pilot presentation with some comedy friends, and when we finished the script, I said, “OK, who should direct this?” They answered, “You should.” I capitulated, but they held strong. The next thing I did was call my DP and say, “We’re making this in two weeks…so in one week we have to shoot a short, so I can learn to direct before I direct!” I fell in love from the first moments I stepped into that role. It really felt like the nexus of all the storytelling I’d been doing until that point: the scene work and performance notes from acting, the story sense from writing, and even the visual and blocking sense that I had from when I used to dance and choreograph. Plus, I got to make it MY vision. Why hadn’t I done this sooner?! I still haven’t taken classes. I read books sometimes to augment my technical knowledge, but I’ve essentially learned by doing. Whenever I wanted to expand, I’d just grab a small crew of friends and a camera and go make a new short. And over time, that scrappy approach really paid off.

NewEnglandFilm.com: What inspired you to make Have It All?

O’Brien: I’m a director/writer/actress, and last year, I also became a mom. Suddenly, I had a new day-to-day, and a new identity. I couldn’t imagine having the bandwidth to shower, nevermind to make a film! I wanted to keep creating, but I thought, “How can I possibly make a film with a five-month-old?” The answer was to make a film with a five-month-old. This is that film, based on a morning that actually happened to me.

I decided to make something for the HBO Insider Comedy Short Challenge for the Women in Comedy Festival and began looking for inspiration. But as soon as I had the experience on which this short is based, I had no doubt this was the story I needed to tell. I realized that there is so much drama–and comedy–that goes on in the daily life of a new mom, which no one else gets to appreciate because you spend most of your time alone with a baby. But also, there was so much about that struggle, and especially about the crazy expectations society places on new moms, that I’d never understood or even considered until I was in that place myself.

What was important to me in the making of it was that the baby is not the enemy—he was being a perfectly good baby—and the guys with whom I work aren’t the enemy either. They were really trying to be helpful and supportive. The expectation is the enemy. Babies are hard but doable, careers are hard but doable, but this societal idea we have that women should be able to do both while maintaining a perfect blowout is completely insane.

But of course, that can get heavy. So I took my favorite approach, which is to use comedy as the vehicle for disguising the social message, to make it palatable and relatable. Truthfully, there’s so much comedy in just the Sisyphean task of trying to get out the door with an infant. And so you should watch because it’s hilarious, and it’s fun, and it’s adorable…but then hopefully it leaves you thinking.

NewEnglandFilm.com: What has the response to the film been?

O’Brien: The response to this film has been greater than I could have ever imagined. In some way, what seemed during production to be a rather small undertaking actually became the most noteworthy and widely-played project I’ve made. We’ve received accolades and incredibly warm receptions from so many film festivals…including some pretty prestigious ones. It’s a funny feeling to see something so personal and “normal” from your own perspective get that kind of attention. But then you realize just how universal the conversation you’ve started is.

In truth, the accolades are so appreciated, but the audience response has been my favorite part of this film so far. From the very first screening, every woman in the audience came up to me to say, “This is my life.” They felt very seen, and several women have told me they laughed throughout… and then cried at the end. I honestly was blown away by that, because the film felt so personal to make, and because this is an issue that isn’t discussed with the openness and vulnerability and seriousness that it deserves. I never expected the amount of discussion and connection that came out of it.

What’s more, I rarely had seen the type of mom that’s in this film on screen. I think often, the comedy tropes of moms are either the fed-up mom with spaghetti sauce on her face whose children are hellions, or else the drunk, crazy mom who sort of regrets having children and is a disaster. Those are both very funny to laugh at, but they don’t feel like what my life as a mom feels like. And it turned out that many women really related to Jill in this film, who’s doing the best job possible with everyone around her doing their best…and yet she’s just up against an impossible task.

O’Brien: Because I made this film when my son was so young, I needed to keep it streamlined. I called on friends and collaborators with whom I’ve worked before…many of them have done lots of my other films. And ultimately, that gave us all a shorthand and it made the piece better, because everyone involved already had such a good understanding of my sensibility. In particular, my DP, my editor, and my composer are longtime collaborators, and so from the first time I shared the idea with them, we were all on the same page about where we wanted to go. And everyone was amazing!

NewEnglandFim.com: What are you working on now?

O’Brien: I do have a couple of independent projects in development, and an early draft of a feature script. But in the last year or so, I’ve turned my focus to directing episodic comedy as well, and now I’m getting more and more entrenched in the TV world (and having so much fun). I was selected for the inaugural class of NBC’s Female Forward program. I can’t say enough about that program and how much it changed my life. NBC is really working hard to fix the pipeline problem, and thanks to that program, I got to direct my first episode, join the DGA, and kickstart a new part of my career. So in late 2018 I shot my first episode for Season 2 of A.P. BIO. It was an incredible experience, and now I’ve got some more episodes lined up for NBC shows, and I’m working to fill my dance card for the rest of the year!