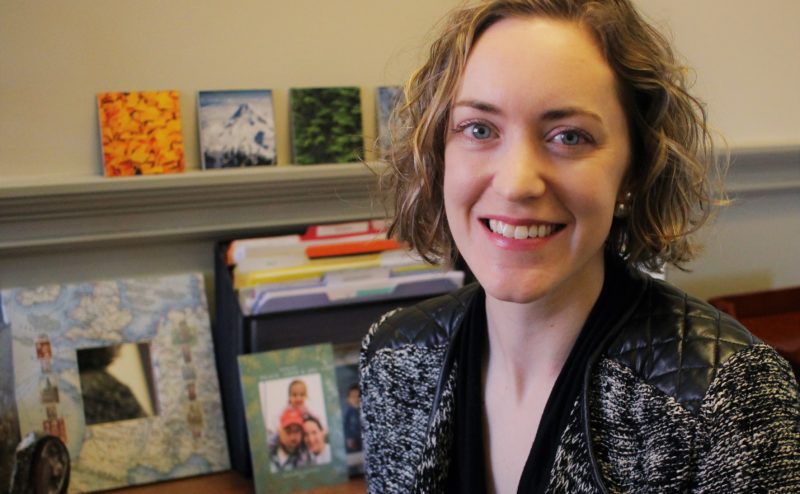 As a finalist for the NewEnglandFilm Stowe Story Labs Fellowship, Sarah Zeiser received partial scholarship to the Labs.

Stowe Story Labs once again partners with NewEnglandFilm.com to offer a NewEnglandFilm Fellowship—which covers a screenwriter/filmmaker/creative producer based in New England to attend the Labs. There’s no separate application for fellowships, so New Englanders can select to be considered when they apply for the Labs. Use discount code NEFSSL for 15% off the application fee.

Here, Dr. Sarah Zeiser—academic, emerging screenwriter, and one of the 2018 Fellows—writes about being both thrilled and intimidated at her chance to learn how to pitch her screenplay to industry execs at the 2018 Stowe Story Labs.

In 2018, NewEnglandFilm.com was able to sponsor two writers to Stowe Story Labs—Wade Wofford for a complete fellowship, and Dr. Sarah Zeiser for a partial fellowship. Here, Dr. Zeiser reports on her experiences at the Labs.

There have been a few moments in my life when I’ve walked into a room and known I was exactly where I was supposed to be. That feeling is usually an indication that you have found your home, your people, your calling. Such was the sensation when I entered the Helen Day Art Center in September 2018 on day one of the Stowe Story Labs. The atmosphere was collegial, expectant, and buzzing with enthusiasm. Here was the start of a four-day-long creative retreat that would challenge me and inspire me equally.

I admit to having more than a small case of nerves upon my arrival in Stowe for the Fall Narrative Lab, an intensive program that brings together screenwriters and industry experts to learn about story development, pitching, packaging, and navigating the often-complicated world of entertainment. I thought of myself as an amateur screenwriter, and the bios of fellow participants were intimidating: published authors, award-winning filmmakers, actors, comedians, and artists with far more industry experience than I had.

Living in Boston, there was a small but thriving network of screenwriters I met and read with, but I was primarily plugged into the academic world following a doctoral degree in Celtic studies and a burgeoning career in academic administration. I wrote creatively for fun.

As a film lover and a history maven, I came to screenwriting as a means to explore the personal and familial lives of historical characters whose actions I read about in medieval chronicles, but whose interior landscapes of emotion and crisis lay beyond historical study. Through writing, I could meet these figures as characters, breathing life into the bare bones of their histories. At the heart of it, for me, was the story.

The research was second nature, but being able to incorporate that into a framework of drama and dialogue could bring the twelfth century alive again. Imagining these characters and worlds on screen felt essential, and so I wrote a television pilot about the early life of the famed Eleanor of Aquitaine, a formidable woman who was queen of both France and England, who went on Crusade, divorced her first husband, led a war against the second, and outlived all her enemies.

When you’re an emerging writer living outside of LA, the question of “what’s next” after you’ve finished a script often leads to screenwriting contests. It was while submitting my pilot to the PAGE Awards (in which I later won Gold Prize for TV Drama) that I first heard about the Stowe Story Labs.

Since Vermont isn’t far from where I live in Boston and I was feeling good about the script I had written, I decided to apply. I didn’t really know what to expect, but knew that if I wanted to take my writing a little more seriously and explore what being a screenwriter was all about, then I would be well-served by a weekend surrounded by fellow writers and industry experts.

When I found out I’d been accepted and would be able to attend thanks to a partial fellowship from NewEnglandFilm.com, I felt both ecstatic and terrified. The weekend might be the turning point in my burgeoning aspirations in screenwriting, but it meant I had to show up prepared to work.

Many people—women especially—have suffered through a bout or two of “imposter syndrome.” We doubt our skills, our work, our right to be in a certain space. I feared that’s what I would experience at Stowe, despite my strong script and the prep I had done in thinking about my story and my writing goals before arriving.

But the first thing I learned at Stowe—in opening remarks and presentations by Stowe co-founders David Rocchio and David Pope—is that, no matter your background or qualifications, every writer is connected by their passion for storytelling. Everyone in that room was committed to producing meaningful, empathetic, and complex stories for screen. Some had more experience doing that, but we were all there to learn.

Over the course of the next four days, we had conversations with and heard presentations by screenwriters, producers, directors, story consultants, financiers, actors, and managers. We were divided into groups of three to pitch our screenplays in mentor round tables. This is the key element of the Stowe Story Labs: intensive, repeated pitching sessions.

With presentations and panels going back-to-back, there isn’t a lot of time to digest and reflect on what you’re learning, and that’s deliberate. The atmosphere is one of a think tank, a hothouse of ideas and adaptation and by-the-seat-of-your-pants creativity that is more invigorating than it is alarming.

With a strong story at the heart, a pitch can find firmer ground in each session, and with the support and feedback of the mentors and fellow participants, writers can find new clarity and perspective for their project. I learned how to speak about the twelfth century to a non-specialist audience. How to frame my protagonist as both an historical figure and a relatable woman experiencing trauma and adversity. How to present my own expertise and argue for the universal impact of the story I had created.

By the end of the long weekend in Stowe, I knew that I had just gone through a transformative experience. I might still be an emerging screenwriter, but I now had a deeper understanding of the industry and of my own capacity to not only write a compelling story, but to speak about it with confidence and precision. These skills would quickly become important when, after Stowe, I learned I had won the PAGE Awards and found myself emailing, calling, and having drinks in LA with writers, producers, and agents. Without the experience and network I built at Stowe, I would have felt overwhelmed and adrift.

The friendships I made over those few days stand as more than a professional network of experienced and connected writers, but as a true fellowship of compassionate and brilliant creators who continue to support one another wherever we are around the world. The mentors and fellow Labbers at Stowe built a community of storytellers who act as advisers, cheerleaders, and friends. I am grateful for the experience of attending and of finding in a quiet corner of Vermont a place and people that gave me that sense of “here is where you are supposed to be.”

Dr. Sarah Zeiser was the Gold Prize winner in the TV Drama category of the PAGE Screenwriting Awards in 2018 with her pilot Aquitaine. She received an Honorable Mention in the NewEnglandFilm.com Fellowship for the 2018 Stowe Story Labs. Dr. Zeiser holds degrees in Celtic Languages & Literatures and Medieval Studies from Smith College and Harvard University. sarahzeiser.com

Stowe Story Labs once again partners with NewEnglandFilm.com to offer a NewEnglandFilm Fellowship—which covers a screenwriter/filmmaker/creative producer based in New England to attend the Labs. There’s no separate application for fellowships, so New Englanders can select to be considered when they apply for the Labs. Use discount code NEFSSL for 15% off the application fee.