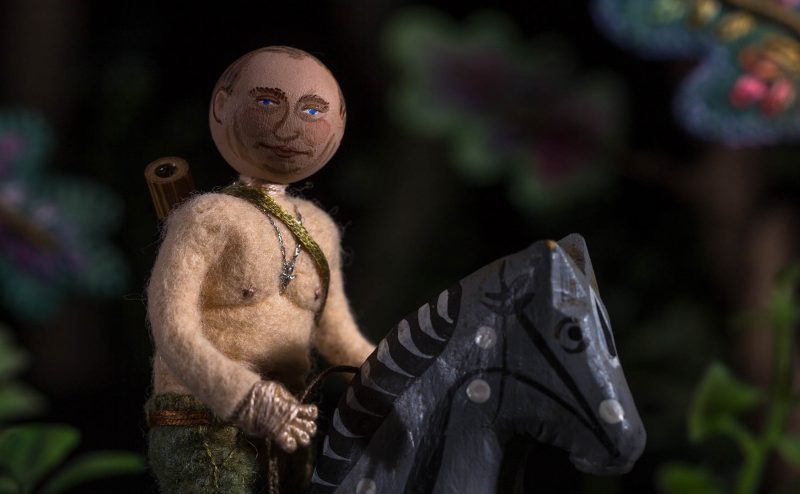 2018 Festival Interview: Liberty and Justice: A Cautionary Tale in the Land of the Free

Liberty and Justice get lost wandering through a dark wood in search of a new leader in this wordless stop-motion political satire.

Liberty and Justice are booted out the door of their workplace which now has the sign “Moved to Mexico” nailed to the front. We follow these two characters through the woods as they wordlessly bop along through a kaleidoscopic forest of creatures, candy and a few extremely familiar (and expertly painted) political figures.

The enticing score and gorgeous mini-world, created by Salley Mavor through her ingeniously crafted stop-motion figures, will draw you in and almost convince you that the new home Liberty and Justice found is a good one.

Originally screened at the Woods Hole Film Festival,  Liberty and Justice: A Cautionary Tale in the Land of the Free is now streaming through October 15 as part of the 2018 Online New England Film Festival. We caught up with Salley Mayor to learn more about her craft and what inspired this zany yet familiar world.

Mavor: I have been a visual storyteller for 40 years, primarily as an illustrator of children’s books. It has been my dream to bring action and drama to the worlds and characters I create. Stop-motion animation was a natural extension of my work, which involves building 3 dimensional environments with dolls acting out the narrative. My years of experience developing scenes and laying out the ark of a story in a sequence of images easily transferred into a more cinematic approach. Through trial and error, I learned about animating the dolls and figured out how to best convey my vision of the story. My art is very detail oriented and time consuming anyway, so filming tiny movements hours on end was not a big adjustment.

Mavor: The day after the 2016 presidential election, I started thinking about my art differently, seeing it as a way to cope with and document time we are living in. In the last few years, I’ve been moving away from the land of innocence and exploring more topical subjects and addressing world events, so making the film was the next step in my growth as an artist.

NewEnglandFilm.com: Where has the film been shown (festivals, other screenings, etc.)?

Mavor: Liberty and Justice had its premiere at the Woods Hole Film Festival, in front of an enthusiastic sold out crowd, who giggled and hooted throughout. Our movie was at the end of a program of serious, depressing and powerful shorts, so it was a relief for the audience to see some political satire. The viewers responded to the humor and I feel that they got the message, even the more subtle connections. The most memorable comment came from a woman who said it was the cutest dark movie they’ve ever seen.

Mavor: Making this film was a home grown effort. My husband, Rob Goldsborough and I collaborated on the project with each bringing our field of expertise. I made all of the dolls and scenery and did the animating, while Rob contributed his talents in photography, lighting, computers and editing. Through a friend, we met a team of local musicians whom we commissioned to write the sound track.

Mavor: I am busy illustrating a children’s book, which I was supposed to be working on during the year it took to make this film. After the book is finished, we plan to make more animated films – some political and some not.