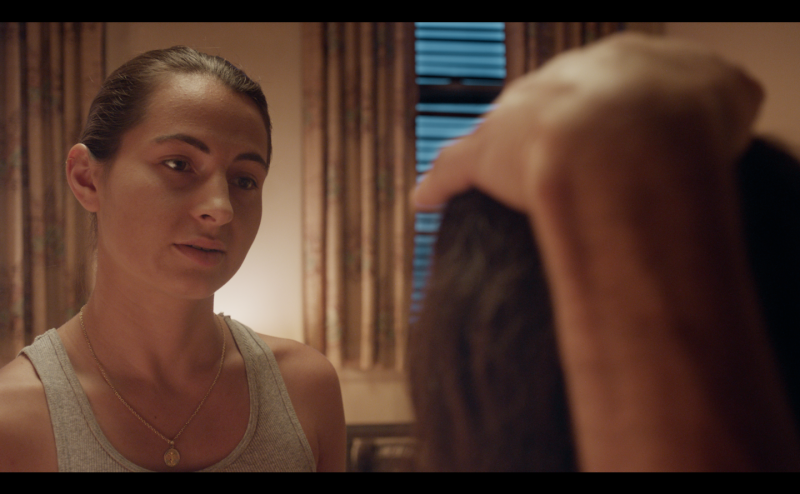 The Flying Electric packs past lovers, friends, and family into one room for a strange and trippy evening.

Laura Colella’s short The Flying Electric packs nearly a dozen characters, lots of wild themes and several rogue monologues all into one room of an old hotel/boarding house. We meet two young lovers trying to have a nice  night in who are constantly interrupted and challenged by a steady flow of strange, funny and downright scary characters. All the action amounts to an ending that must be seen to be fully understood.

The Flying Electric is now streaming through October 15 as part of the 2018 Online New England Film Festival. We caught up with Colella, the film’s writer and director to learn more about her inspirations for this short and how we can reach her directly to be involved in her next project.

Colella: I discovered the possibility of studying filmmaking when I was a freshman in college. I had been involved in theater, art and dance, but filmmaking devoured all of those creative impulses and became my principal focus.

Colella: I wanted to make this film with local actors I was interested in working with, basically for fun, and to grow, and exercise filmmaking muscles. I had mostly been focused on feature projects but wanted to experiment with material that was a little unusual for me. I’ve been told by some that it’s dark and disturbing, but I don’t really see it that way, so the differing personal responses and discomfort about certain aspects have been interesting.

Colella: I had a small crew of just a few people filling multiple roles, with a terrific NY-based DP Shawn Peters whom I met through Terence Nance. A filmmaking friend was coincidentally visiting from LA at the time so I recruited him. My longtime boyfriend and frequent collaborator Aaron Jungels is in the cast and crew, as he is for most of my films. Other cast are actors I had worked with before or wanted to work with, and four belong to Aaron’s family of artists, including the two main actors, who are sisters. I deliberately tried to go for a familial resemblance between the film’s seven characters so that they somewhat blur together.

Colella: I’m currently finishing a feature script I hope to film early next summer in Rhode Island. Email me if you’re interested! ZiaFilm7@gmail.com.

Collela: After making features, I thought an 18-minute short would require way less effort to whip out. Wrong. It was a ton of work!

Colella: I’ve been mainly teaching to support myself over the years, making films on a shoestring budget whenever I could muster the support. I teach screenwriting at Brown, and I am the chair of a low residency MFA in Film Program at Vermont College of Fine Arts. I’m especially proud of the latter program, which enables filmmakers to live wherever they’re based, while working towards an MFA as they make and/or write their projects with one-on-one mentorship from fantastic faculty.