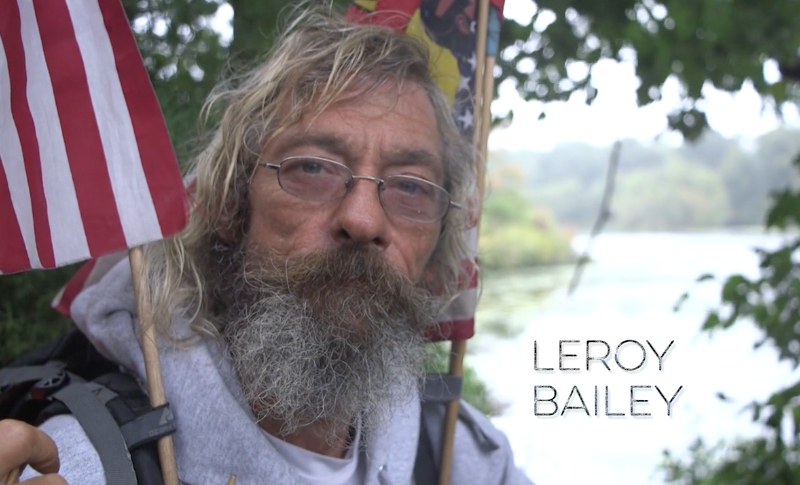 A still of Leroy Bailey from Brian McPartlan's documentary Praying for Change.

Brian McPartlan chats about Praying for Change, his documentary on homelessness.

Screening through October 15 as part of the 2017 Online New England Film Festival, Praying for Change highlights homelessness in the US through the lens of Leroy Bailey, a man committed to improving the lives of homeless veterans. In this interview with NewEnglandFilm.com, the film’s director Brian McPartlan reveals his inspiration for the film and Netflix the documentary that inspired him to become a filmmaker.

Documentaries can have a profound impact on society by shedding light on important subjects, so that viewers are moved to spur societal change. This type of activist filmmaking is what inspired Fitchburg State University film student Brian McPartlan to make a documentary of his own after he spoke to homeless people in Manchester, NH. What started as a straightforward project about sharing the stories of New England’s homeless shifted however, after his producer learned about Leroy Bailey.

Bailey is on a God-appointed mission to walk the perimeter of the United States to raise awareness about issues facing the homeless and raise money to build homeless shelters across the country. McPartlan found Bailey’s mission fascinating, so he decided to focus on Bailey in his documentary Praying for Change, which raises awareness about issues facing the homeless through interviews with Bailey and with people who are currently homeless.

Originally screened at the Salem Film Festival: Mass Reality Check, Praying for Change is playing through October 15 as part of the 2017 Online New England Film Festival. In the following interview with NewEnglandFilm.com, the film’s director Brian McPartlan shares the memorable encounter in New Hampshire that got him interested in issues affecting the homeless, the Netflix the documentary that inspired him to become a filmmaker, and the ways YouTube shaped his film education.

NEFilm: How did you to get into filmmaking?

McPartlan: That’s a long story, but I knew I wanted to specifically be a documentary filmmaker when I watched the Netflix documentary The Square. I was never really into documentaries, but The Square made me realized you could make a documentary that is just as engaging, as powerful, and as a cinematic blockbuster movie, with characters that bring you through (and drive) the story arc in very compelling ways. And it reminded me that you could do hugely important things with documentary, like exposing governmental corruption and injustice to the rest of the world who is kept in the dark.

NEFilm: How did you receive your education in film?

McPartlan: I learned mostly from watching and studying films and documentaries that I really like and whose styles and techniques I wanted to do something similar to. Then a lot of the technical how-to stuff I learned from YouTube and just doing it on my own. YouTube is amazing. And yes, my school’s film program didn’t hurt either, but like I said, YouTube is amazing.

NEFilm: What inspired you to create Praying for Change?

McPartlan: Sitting down with homeless people and hearing their stories and circumstances and realizing they are so misunderstood and generalized. A couple weeks before classes started I met a homeless man and a young homeless pregnant woman, who he looks after, in Manchester NH, as I came out of a gyro restaurant. Their stories just blew me away and I spent a while with them hanging out on the side of the street as people walked by, refusing to even look at or acknowledge them, let alone donate any money. I felt judged by the people passing by, who probably thought I was homeless as well. It was a huge perspective shift, seeing the world from that point of view. I definitely felt a calling.

NEFilm: How did you find a cast and crew for the project?

McPartlan: It was a school project for my Advanced Documentary course, so on the first day of class I pitched the idea of a documentary on homelessness where we go out and interview homeless people and get an inside look at their lives and their struggles. Christine, Kevin and Yosmarlin were totally into it so we agreed on that and started planning from there. Our professor, who’s an awesome dude, totally thought we would fail, but let us go for it anyways.

We met homeless people by simply approaching them on the street and asking if we could talk with them on camera for our documentary. Christine, our producer, was in a waiting room at the doctor when she saw Leroy on the news on TV. She copied down his info, reached out, and he was totally down to meet up that weekend in Rhode Island.

NEFilm: Have you showcased the film elsewhere?

McPartlan: It won first place at Salem Film Festival: Mass Reality Check which was awesome, screened at Fitchburg State’s Visions exhibition, and twice at my old church which donated to our fundraiser. It also screened at a senior center in my town, where 6 people showed up and afterwards remained focused on their notion that Leroy should have shaved his beard and hair all along.

NEFilm: Are you going to continue to create documentaries with a focus on homelessness?

McPartlan: I’m looking into making a part two to this documentary, along with a number of other activist-minded documentaries and project ideas I have that I want to get started on at some point, but lately it’s just been wedding videos, part time gigs, and looking for an internship for the fall.

NEFilm: Do you have any advice for film students like yourself?

McPartlan: I’m not sure if I have any great advice like that for anyone, but my advice for filmmakers is to have real purpose and intention with whatever you’re doing. Do stuff that’s going to help the world in some way—we have too much mindless entertainment out there already. This medium is a real opportunity to make a difference on a bigger scale and platform than most people ever have access to.

Watch Praying for Change on NewEnglandFilm.com through October 15 as part of the 2017 Online New England Film Festival.