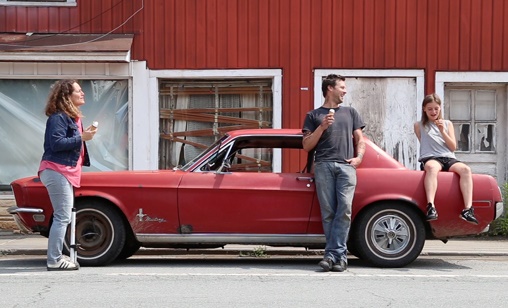 Halfway to Zen will screen at the 2017 Woods Hole Film Festival.

Now in its 26th year, the Woods Hole Film Festival has a considerable list of alumni. This year, many of them return to the festival to showcase their latest films.

After 26 years and thousands of alumni, the Woods Hole Film Festival is known as a place where filmmakers can get their start and come back with future projects. MovieMaker Magazine has recognized it as one of the top 50 film festivals worth the entry fee for several years running, bolstering its stature and popularity. It’s no wonder the Festival received so many submissions this year—more than 1,000 from everywhere from Mashpee to Martha’s Vineyard and South Africa to Sri Lanka.

The festival’s intimate environment is also legendary, enabling both first-time and veteran filmmakers to consistently forge new partnerships and collaborations with one another, as well as receive personal and meaningful feedback from audience members. It’s why filmmakers return to the festival again and again.

In fact, a dozen of the 132 films in this year’s line-up are by filmmakers who have participated in the festival in the past at least once, and sometimes more often.

Opening night on Saturday, July 29 features real life romantic and comedy partners Etta Devine and Gabriel Diani (The Selling, WHFF 2012), who are returning to the Festival with Diani & Devine Meet the Apocalypse, an old fashioned, madcap road movie that they wrote, directed and starred in. The couple plays themselves as a modern-day Burns and Allen struggling to make it in show business. When all power and communication systems mysteriously shut down, they hit the road in search of a safe haven. The film features a cameo by Golden Globe winner Barry Bostwick (Rocky Horror Picture Show) and a multitude of familiar television and film faces.

Another real life couple—Toby Poser and John Adams (Knuckle Jack, WHFF 2013)—and their two daughters are back with Halfway to Zen, their fourth narrative feature. As always, the film is a family affair with both parents and children involved in the writing, direction, production, filming, editing, scoring and acting in this drama about a fractured family’s reimagined future. Poser, who earned a fan base for her turn as Amanda Spaulding on the long-running CBS soap opera Guiding Light, explains that the film aims to address and spark conversations about several timely issues, including the effects of Alzheimer’s and dementia on family, gender identity, addiction, the grinding cycle of violence, and the surprising nature of mercy. The whole family will also be on hand for the film’s screening on Thursday, August 3.

Filmmaker Alice Stone made her filmmaking debut at the Festival in 1995 with She Lives to Ride, a stirring black and white profile of female motorcycle riders. This year she returns on Sunday, July 30, with Angelo Unwritten, her second feature-length documentary, which takes a close-up look at a Massachusetts foster family and is set to original music created by the eponymous Angelo. A gifted yet troubled young man who spent his early years in the foster care system until he finally landed with his final set of foster parents at age 12, Angelo dropped out of high school and ran into trouble with the law as he stumbled into adulthood. Yet his parents never truly gave up on him, and their devotion eventually began to pay off in unexpected ways.

Prolific documentary filmmaker Anne Makepeace (We Live Here Now, WHFF 2011) is out with another documentary feature about Native Americans called Tribal Justice, in which two Native American judges—Abby Abinanti, Chief Judge of the Yurok Tribe on the North Coast of California and the first Native American woman to pass the California bar exam, and The Honorable Claudette White, Chief Judge for the Quechan Tribal Court, who also serves in tribal courts throughout Southern Arizona and California—reach back to traditional concepts of justice in order to reduce incarceration rates, foster greater safety for their communities, and create a more positive future for their youth. By addressing the root causes of crime, they provide working models of restorative justice with the result being that mainstream courts across the country are taking notice. Makepeace will participate in a Q&A alongside Judge Jeffrey Madison of the District Court of the Mashpee Wampanoag Tribal Court. It screens on Friday, August 4.

The timely issue of digital privacy is given a humorous spin in the feature length comedy Life Hack by Sloan Copeland, produced by festival alum Doug Roland (The Robber Barons of Wall Street, WHFF 2010). The cautionary tale about cyber threats in the digital age will have everyone covering their webcams and hiring an Internet reputation manager! The film’s ensemble cast includes Sean Kleier (TV’s Odd Mom Out), who coincidentally also starred in the Festival’s world premiere of Off Season, and Devin Ratray (Home Alone, Nebraska). It screens on Friday, August 4.

Some filmmakers are returning with their most recent short films after screening feature length films in previous years at the Festival. Boston-based filmmaker John Stimpson has even shown several of his feature and short films—including The Off Season, which won best Cape Cod feature in 2014, and The Legend of Lucy Keyes, starring Julie Delpy in 2006, as well as the short Contrition in 2009—at the Festival in multiple previous years. He returns this year with Soul Candy, a narrative short about a young couple who bond over author David Foster Wallace in a used bookstore.

Another Boston-based filmmaker, Elika Portnoy, whose narrative feature, Tricks of Love played at the festival in 2009, is returning this year with a very personal film called The 6th Amendment, a narrative short about a diverse jury of twelve people who deliberate together on the Boston Marathon bomber case. Portnoy, who has worn many hats in her career—writer, director, actor, and executive producer—is also participating in “Survival Strategies for Independent Filmmakers,” a panel discussion sponsored by Women in Film and Video/New England on July 31.

Additional returning filmmaker with short films include: International Film Festival of Boston founder-turned-director Adam Roffman (Spearhunter, WHFF 2015) with The Collection, a documentary about an astonishing collection of movie memorabilia; NewEnglandFilm.com founder Michele Meek (Red Sneakers, WHFF 2008) with Imagine Kolle 37, a documentary about two girls who imagine their way to Kolle 37, a real adventure playground in Berlin where children build and climb three-story wooden structures, make fires, and use hammers, saws and axes without supervision by their parents and learn to embrace risky play; and actor, writer, director and producer Bob Celli (Figs for Italo, WHFF 2015) with Brooklyn in July, a drama based on a true story and inspired by the song of the same name about an African-American World War II veteran working as a chauffeur during the summer of 1945; and Marnie Crawford Samuelson (Inside Motherwell’s Dumpster & Selina Trieff Will Not Stop, WHFF 2014 & 2013, respectively) with the short documentary Tick Days, a profile of county entomologist Larry Dapsis, who’s at the epidemic’s ground zero on Cape Cod.