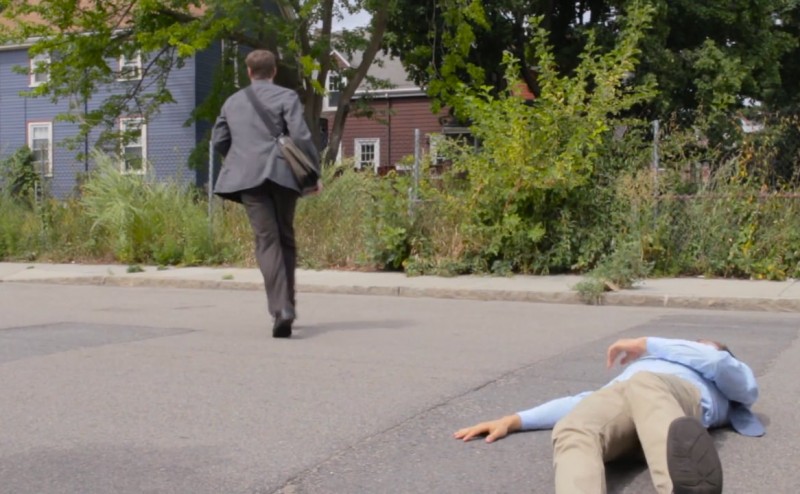 Festival Interview: So Help Me God

An interview with Rebecca Maddalo about the comedic storytelling techniques in her short So Help Me God.

Rebecca Maddalo needed to make a more lighthearted film after her last project — a dark relationship drama. That’s how she decided to make the short comedy So Help Me God, which is now playing through October 15 as part of the 2016 Online New England Film Festival. Here, Maddalo explains her storytelling techniques in the film and how they’re specifically designed to create humor.

Since Rebecca Maddalo’s last film was a dark relationship drama, she wanted something more lighthearted for her next project. That’s how she landed on So Help Me God, a short comedy about a hapless guy trying to make it through the day with a little help from an unexpected friend. In the following interview with NewEnglandFilm.com she explains her storytelling techniques and how they’re designed to create humor in So Help Me God, which is now playing through October 15 as part of the 2016 Online New England Film Festival.

NEFilm: How long have you been making films for?

Maddalo: I had always been interested in art, but I didn’t find my way to filmmaking until my sophomore year of college. That spring semester, I took a documentary filmmaking class that changed my life, and I was forever hooked. I studied filmmaking for the rest of my college career and continued to pursue it after graduating. I’m heading back to school this fall to study as a Directing Fellow at the American Film Institute in Los Angeles.

NEFilm: What was your inspiration for creating So Help Me God?

Maddalo: After working on my previous short film, Burning, which was a dark relationship drama that played with chronology and flashbacks, I was eager to do something more lighthearted and fun. So Help Me God was born of that need. I knew that I wanted to do something completely different from Burning, so we focused heavily on prioritizing physical comedy. I wanted the film to make sense visually without a lot of dialogue, while still having enough of a playful mystery that would ask the audience to engage with the film. I also knew that I wanted to play with shooting long takes, so each scene of the film where the two main characters are together was shot as a long take, and then later in the film when they are separated, we used more cuts to highlight their division.

NEFilm: How did you gather a cast and crew for your film?

Maddalo: I found my cast and crew in a few ways. I met my cinematographer, Chris Masterson, in the film department at Harvard. My production designer, Madie Hays, was my college roommate. She introduced me to our sound designer, Brian O’Rourke, and to our gaffer, Eric Brown. The composer, Kyle Randall, I had also met through Harvard, and we took a few music classes there together. The two lead actors, Larkin Ormes and Joe Szafarowicz, both came to us from ImprovBoston; I had also worked with Larkin on my previous short film, Burning. Our other actors we found by casting through NewEnglandFilm.com, and our remaining crew members I met either through friends of friends or through Emerson.

NEFilm: Do you have anything else you are working on?

Maddalo: We just wrapped a short called What She Doesn’t Know a couple of weeks ago. It is an interpersonal drama, and it was an absolute pleasure to work on, the cast and crew were just stellar, so I can’t wait for that to go into post. You can see some of my work at www.rebmadpictures.com.