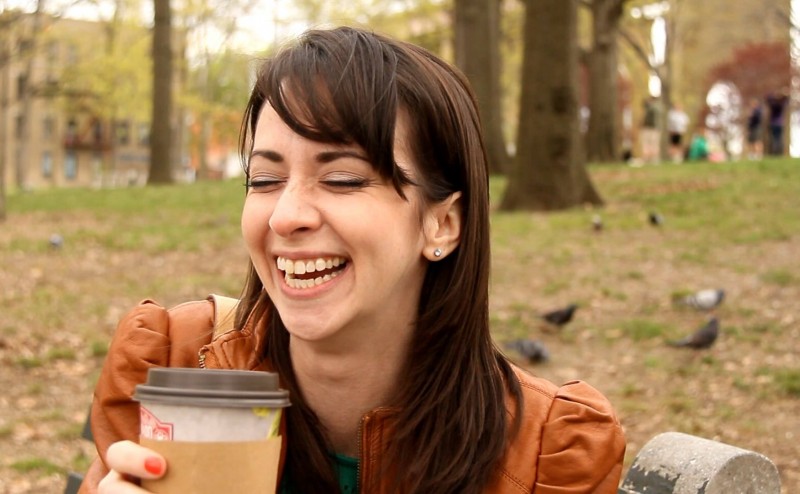 If there’s anyone out there who has never had a bad date, let us know. Seriously, we want to hear from you.

Writer and actress Rachel Riendeau, for one, has her share of amusing dating mishaps and horror stories, which has become fodder for the film Pillow Talk, which she co-wrote with Lincoln Hayes.

Pillow Talk premiered last fall at the Vermont International Film Foundation Vermont Filmmakers Showcase, and Riendeau and Hayes went on to win the Screenwriting Award and the Goldstone Award for Emerging Vermont Filmmakers. Currently, Pillow Talk is screening on NewEnglandFilm.com as part of the 2016 Online New England Film Festival.

Here, directors Hayes and Riendeau talk about comedy writing, audience reaction, and what they think is the hardest part of making films.

NEFilm: What was the inspiration behind Pillow Talk?

Rachel Riendeau and Lincoln Hayes: Most of the stories are from Rachel’s dating life. We were looking to showcase her talents with a female-centric story.

NEFilm: How has the audience response to the film been?

Riendeau and Hayes: We had a great time screening it to an audience for the first time and were thrilled by the overwhelming response. There’s not a better feeling than hearing the audience laugh when you wanted them to! As is our way, once we finish a project, we move right along to the next one, so Pillow Talk is available online to the public.

NEFilm: Talk about working with the director of the film, Neil Fennell.

Riendeau and Hayes: I’ve known Neil for years and have wanted to work with him for a long time. He brought on our Director of Photography Duane Ferguson (who shot the interiors) and the rest of the cast are friends and colleagues from mine and Rachel’s acting circles, a few of whom have appeared in national tours, commercials, and one who is a professional magician (as well as an insanely talented actor, writer, and director).

NEFilm: What’s up next for you two?

Riendeau and Hayes: We just finished a sketch called Dinnergate, which is available online. As performers, Rachel and I are about to begin shooting a feature film called Northland. Also, our most recent short film What Kent Did was recently screened at the Chain NYC Film Festival in NYC, and we have several other sketch projects lined up for the fall. I was also recently offered a fellowship to attend the Stowe Story Labs writers’ retreat in September and I can’t wait to get started and workshop one of my scripts!

NEFilm: How did you get your start in filmmaking?

Riendeau and Hayes: I’ve been making movies since grade school. I made my first short film in college called Tuesday, and it’s pretty terrible. Two thirds of it are available online, the remaining third is lost forever (thankfully). I studied theater and journalism in college and took as many film classes as I could. I’ve studied film and filmmaking ever since, have worked as an editor, and produce and co-host a movie review and commentary podcast.

NEFilm: You host a podcast?

Riendeau and Hayes: It’s called “What the Hell Are You Watching?” and I wouldn’t be mad if you all checked it out.

NEFilm: What other ways would you recommend involving yourself in film?

Riendeau and Hayes: Filmmaking comes from a love of film, and you can’t have that without consuming as much of it as you can. Go to movies. Watch TV. Watch all the new Netflix and Hulu programs. Get or borrow an HBO Go login. Consume. And whatever you decide to make, be passionate about it. If you don’t have the fire to tell the story, it won’t resonate with your audience. Make good work!

Riendeau and Hayes: The hardest part is doing it. It’s easy to say you will and to start to do things, but actually making the thing is the hardest part.

Then everything after that is only as difficult as you want it to be. Submit for every festival you can (afford) or that you feel is right for your piece and find a great group of people to work with.

Build a network, use social media, and keep in touch with actors and filmmakers you want to work with in the future.

And be nice to your grandparents, aunts and uncles. They’ll be the first to hit up for funds!

Pillow Talk is screening on NewEnglandFilm.com through as part of the 2016 Online New England Film Festival.